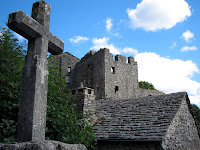 There are two types of clerical strongholds: those of Patriarchs and those of Evil High Priests, their Chaotic equivalents. Clerics are served by fighters of 4th level (hero) or 8th level (superhero), ents or hippogriffs. As with griffins and rocs, the hippogriffs are ridden by heroes. EHPs have trolls, vampires, white apes or spectres as their retainers. Generally clerics only request a tithe rather than a quest, although if the tithe is refused one will be commanded.

One important thing to remember is that nazgûl in OD&D are assumed to be spectres (as opposed to Chainmail which treated them as wraiths). Such riders are fearsome encounters near an EHP's castle, as are level-draining vampires. The ent, conversely, is a great subtle defender of a cleric's castle; an enemy force might ride up to the walls only to find that the trees they rode past are alive and will defend them.

The cleric in a siege is a fearsome opponent. If his castle is in a wooded area, Turn Sticks to Snakes is potentially quite deadly, as is a creative use of Speak with Plants, and Insect Plague will almost certainly turn away the footmen needed to capture the stronghold. If he has 7th level assistants casting Create Food and Create Water, or does it himself, there is no question of starving out a small but stalwart group of the faithful.

The impact of high-level clerics in the game world obviously stems from the Raise Dead spell. The character can only be dead a few days, at which point Constitution comes into play (low Con characters may not survive). Every cleric high enough in level to cast Raise Dead is also high enough in level to have their own castle. Since there are eighteen castles on the Outdoor Survival map and one-sixth of the castle inhabitants are (presumably Lawful) Patriarchs, that means there are three nonplayer clerics in this realm who can Raise a PC, unless more are in cities without a castle of their own - nothing is detailed about this, but even so one per city would give a maximum of 12 Patriarchs, none guaranteed to be within 4 days' ride of the characters.

Of course this can create an interesting opportunity. If a Patriarch is not available, perhaps an Evil High Priest could cast Raise Dead - though this would be at some terrible price. EHPs are not immediately belligerent per the rules, and could negotiate with PCs.

One reason I like the idea of clerical strongholds so much is that it reinforces the idea that a cleric is not another term for a priest. Clerics are much closer to the knight templar type, abjuring in OD&D only edged magical weapons, and leading cavalry and crossbowmen. The OD&D cleric is a templar and a vampire hunter, and I think it's interesting if their training involves the initiation into secret mysteries, only slowly being taught the true powers - after all, the cleric can't cast a single spell at first level, and must prove himself to the order in order to gain even that.

Given the castle density I would suppose that the Lawful clerics are tied to a single order rather than spread across multiple deities, while the Evil High Priests who should occupy three of the castles are each individual forces, as befits servants of Chaos. This could have interesting consequences when a PC cleric goes to build his own stronghold.
Posted by Wayne R. at 11:03 AM