Get your bear coat on! 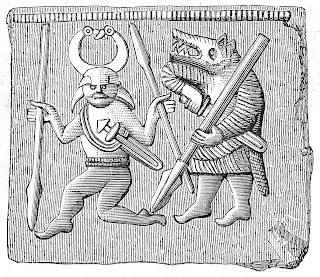 The original etymology of berserker comes from the Old Norse word berserkr, which meant "bear shirt" or "bear coat." It described the ferocious Viking warriors who would go into battle, some of them wearing the eponymous pelts of a bear instead of shirt or armor.

There are various hypotheses for what exactly gave them their ferocious rage, and exactly what that meant. OD&D interpreted it, and most clones follow, as a mere +2 to hit. I prefer Snorri Sturluson's description:

His (Odin's) men rushed forwards without armour, were as mad as dogs or wolves, bit their shields, and were strong as bears or wild oxen, and killed people at a blow, but neither fire nor iron told upon them. This was called Berserkergang.

These berserkers, then, were not just ferocious but powerfully strong; in Swords & Wizardry I'd give them a 17 Strength and the attendant +2 to hit and damage. But that hardly lives up to these mythic warriors' reputation.

So for a tougher take on the berserker, I'd propose this: it's the bear shirt itself that has special properties. Snorri and other Norse writers were quite clear about the immunity to fire and iron, and I would play with that using the actual bearskin: when wearing the pelt of a bear or wolf, a berserker takes half damage from steel weapons (none from pure iron), and automatically saves versus fire attacks (taking no damage from mundane fire). At the same time, the bear shirt itself forces the warrior to fight until victory or death.

Not every berserker wears the coat. Indeed, it is a mark of high status since there are only two ways to obtain one: you can either slay the bear, or slay a berseker wearing a bear coat. Their preparation is only known in a few select cultures that produce such warriors, and takes several months to properly cure. The inside of the hide is laid in with runes against iron and fire, and the words that summon the bear's spirit into the wearer. Usually it is only the leaders and elite fighters of a berserker group who will wear the shirt.

If the bear coat is ever sold, it loses its magic. It embodies the victorious fighter's spirit, and exchanging money for such a coat destroys that at a glance. In some cases, when they are sold, the original bear may come back to haunt the buyer for their insult to its once-mighty fighting spirit. And it is angry.
Posted by Wayne R. at 12:56 PM