Dwarves, the Other Dark Elves 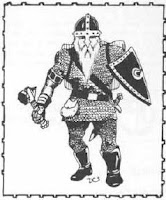 Elves, as I discussed before, are intrinsically related to Faerie. As are hobbits. Completing the Tolkienesque trifecta, of course, means dwarves.

There are a few themes that run through the presentation of dwarves. One is that they're inexplicably Scottish (the dwarf in Poul Anderson's Three Hearts and Three Lions actually speaks in some Scots-influenced English) despite being plainly Norse in inspiration; another is that they're greedy, which is sort of cringe-inducing when you realize that Tolkien equated them with Jews; and third is that they live underground and like axes and hammers.

In Norse myth, dvergar (dwarves) are sometimes equated with svartálfar (black elves) or dökkálfar (dark elves). They are the opposite side of elves, and somehow have gotten the reputation that they are carved from stone. I have something a bit different in mind.

Unlike elves, dwarves don't study magic. That's because they did something different from the elves, who stayed out of Faerie and in the world of light - hence the name "light elves." The dark elves rebelled, abjuring both the Faerie realm and the world of light above, instead choosing a world of darkness - the world beneath the ground. This was long ago, before it began to be claimed by the underworld. Instead of learning the magical arts, the faeries in this sunless world channeled all their energies into creating works of beauty with stone and metal.

In the process, the dark elves became shorter, stouter and more like the earth they worked. Their hands, initially fine as gossamer, became heavy and work-worn. They grew beards, and their songs became deep and bassy, and their aspects became less attractive. The inherent magic remaining in them makes them hard targets for sorcery. They grew hardy but strange to the faeries living above. Yet the child of a dwarven couple looks remarkably like that of an elf, and if raised by elves may recover some of the fae aspects.

Artifacts of the dwarven masters are inherently magical items, and many of the +1 swords and the like are of dwarvish make, rather than being enchanted. The oldest and greatest artisans turn out masterworks that humans would weep to see because of their beauty. Yet a dwarven master sacrifices much: becoming a master smith means forsaking the light world above forever and dedicating oneself solely to the dark world beneath. These dwarves lose their abilities to craft magical items if they are touched by even a ray of sunlight. Adventuring dwarves are youths, who have yet to truly become one with the world beneath.

Dwarves therefore are very protective of the world below. Legend says that the Dwarven Lords of old created the gnomes, using the last of their ancient magic to invest a few dwarven children with the ability to prevent the dungeons from growing beneath the earth. These gnomes are periodically born to dwarven parents, and can be told immediately because of their shock of white hair. They call them "cousins" but in reality the gnomes are the children of dwarves, often literally.

It is a frequent misperception of dwarves that they are a dying race. The truth is, settlements that humans see are minor outposts. In order to prevent the underworld from consuming the great dwarven kingdoms, they had to cut their cities off from the world above. They can only be accessed through special paths that only the dwarves know. Yet even these paths bring a danger, the edge of Chaos can still seep through...
Posted by Wayne R. at 10:59 AM