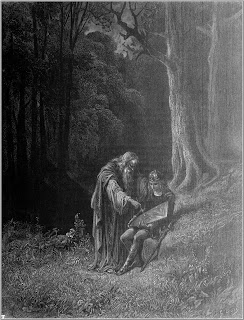 Yesterday I mentioned that artifacts are one of the things that I miss having rules for in S&W Complete. Of course I still have Eldritch Wizardry and the DMG and all, but it's a rule I feel enriches the game. Another is the sage, which was introduced in Blackmoor, per Dan Boggs as a PC class but made an NPC by Tim Kask, and had a much more thorough treatment in the DMG. The original sage rules gave the sage a basic and sub-category, rules for a Sage's Guild, and a table that returned chances that the sage would know a question. It's simple, even if in the original rules it's ludicrously expensive with prices given in the 50,000 to 100,000 GP range.

Having the ability to hire out a sage in an RPG is tremendously useful, both in terms of play and for the referee. For the players, the reasons should be pretty obvious: it's a basic way to get information about spells, monsters, enemies, weird locations, artifacts and so on. It's something I don't see enough of and feel should be a standard part of good D&D play. Rather than going off into an unknown tomb, research its history and anything known about its creator - this can be almost as useful as Library Use in Call of Cthulhu.

But in the referee's case, a sage is a golden opportunity to add more depth to the world the players are exploring. So many RPG products give the referee a wealth of details which vanish after a 10-minute fight kills the NPC or monster. A sage is a golden opportunity to run much of that background into the game without giving up spoilers or simply having the PCs sit through a history lecture. That long introduction to the adventure has a use, but it's buried in the back of Supplement II.

As with artifacts, sages offer a great way to get bits of the impression that the setting is really deep even if it isn't. It also allows non-magical books to be a really potentially valuable part of a treasure hoard: that book Trees of the Northeastern Flanaess might not get most PCs' juices flowing but a sage with an interest in botany may trade some research on a more interesting subject for a copy. Of course such concepts should be limited - in an RPG such an ability should not be able to be exploited, and ticking off a sage can create some justifiable ire and future problems when the characters want information.

In Blackmoor, sages are explicitly stated to be part of a guild, which looks after its members and has rules about unjustly firing a sage once employed. I like this wrinkle and think it adds to the default fantasy world that characters live and interact in; it makes sure that characters don't abuse these interesting NPCs. And a sage also has a death curse, which is just awesome - death curses are something I've been interested in for a while. It's a great way to make NPC death meaningful.
Posted by Wayne R. at 10:22 AM