The Woods of Myth 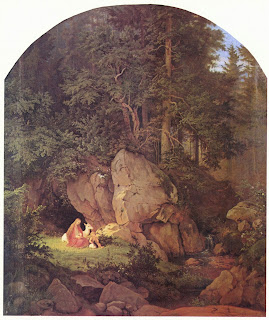 The woodlands of the OD&D world are thick and plentiful, second only to grasslands in terms of number of hexes. Over half of the castles are actually in wooded locations, and although they only contain one town, three others sit on the border of forests. Woods surround both swamps. They are presumably the reason for the low population density of the OD&D setting, since so much of the arable land is forested. As we will see, there may be good reason that more has not been cleared for farmland.

In the encounter tables, the most common (1 in 4 chance) are lycanthropes. Werewolves, wereboars, weretigers and werebears stalk the woods in uncommonly high numbers, and by alignment, only the werebears can be Lawful. These are mostly small family packs, and lycanthrope attacks create fresh lycanthropes. Foresters and rangers in this world must prize silver weapons, and no logging expedition would dare go out unless it was guarded by men with silver. This is a double danger since lycanthropes can be either human or animal in form, and what appears to be an encounter with bandits may suddenly turn much more dangerous.

Your "typical" humans wander the land - bandits, brigands, berserkers, and high level classed characters. These are presumably travelling parties from the leaders and defenders of the nearby castles. Bandits and brigands amass in relatively large forces, 30-300, and presumably prey upon various merchant caravans. Given the demographics, there are an extremely high number of such if you roll 30-300 men-types as per Monsters & Treasure, and each major forested area should have perhaps 2-3 groups, either bandits or brigands (like bandits but Chaotic). The brigands are presumably deserters from military service while the bandits are general outlaws from civilized society.

The real depth of the forest comes in the "Optional Woods" table of encounters which includes centaurs, unicorns, minotaurs, gorgons, pixies, manticores, dryads and medusae. Centaurs are explicitly stated to live in hidden glens and be at least semi-intelligent. In ancient Greek myth the centaurs represented barbarism and civilization was triumphant over them; in OD&D, some centaurs are actually Lawful in alignment, and fit more of a role as ancient defenders of the wood. Unicorns are always lawful and follow medieval myth in only being approached by maidens. These are powerful creatures, and a typical encounter might be with a powerful maiden-warrior who has taken a unicorn for her mount.

Minotaurs are an interesting choice, since traditionally they are so closely associated with Daedalus's labyrinth. These are obviously the awful half-man, half-bull hybrids, and they are described as man-eaters who always attack. Gorgons are, as I discussed back in March, based on an article that showed a monster like the khalkotauros that had a poison breath. Manticores are straight-up horrors to cross, and I've already talked about medusae and pixies.

Dryads are interesting because they're one of the encounters that is totally non-violent but can potentially remove a character from the game; they will use Charm Person when approached, with -2 (stated as 10%) to the saving throw, on 90% of the people who approach them. It's a powerful encounter but its character-removing nature is entirely optional, since an intelligent character shouldn't go up to a dryad. It's also worth mentioning that elves don't have any of their usual immunities in OD&D and would be impacted by this just like any other character.

The woods in OD&D are a truly mythical place, full of wonderful and horrible things. Humans build castles here to huddle behind the walls - and flying defenders - when they're overflown by manticores or attacked by brigands. They hire guards armed with silver or magic against raiding wereboars and weretigers. The forest is like to be peopled by the occasional emdusa and gorgon statues; their lairs take on the "statue garden" aspect. But it is possible to ally with the occasional centaur tribe, or hope for help from a unicorn-mounted maiden. It's a place where heroes can be made, or disappear never to be seen again.
Posted by Wayne R. at 10:29 AM