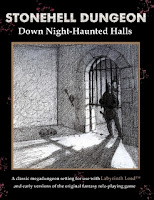 I'm currently preparing to run a new game that will be using Stonehell as its "tent pole", and I've been thinking a lot about what I want to do with the module. As a referee I have very rarely used modules in the past, and one of the things I've always talked about on this blog is the difficulties of publishing megadungeons. Stonehell was the first OSR megadungeon to come out, and is generally excellent. There are some quadrants I'm less fond of than others - I don't really care much for the "monster dorm" on level 3 - but overall I think it's a very viable basis to use as the center of a campaign.

Any fan of older D&D should know instinctively where Stonehell goes. Level 0, the box canyon with the opening of Stonehell, fits very neatly over the map of the Caves of Chaos from B2 Keep on the Borderlands. I'm not the only one who has noticed this, and following it through the wilderness map of KotB seems to be the perfect place to actually locate Stonehell. As needed I'll be able to expand the wilderness map with other places of interest pilfered from here and there; for instance if the players want to go to a town I have Verbosh.

One of the things I love about Stonehell is how it solved the basic problem of flipping back and forth by putting the room keys on the same two-page spreads as the quadrant maps. With modules it's terribly inconvenient to actually use the room keys when they're separate from the map, and a lot of recent modules don't use the TSR folder format so you often have to flip back and forth between key and map, or photocopy/print the map, or have the PDF open on two screens at once. None is a great solution. Stonehell embraces a modified one-page dungeon template and gets it done, keyed with a fairly minimal level of detail but enough to make Michael Curtis's intentions clear.

The problem with this approach is that Stonehell winds up being a dungeon that fits in a set of 600' x 600' squares. All 5 levels in the first published book basically seem to stack more or less on top of each other, like a giant layer cake of evil. But I've always felt that a megadungeon should look more like this: 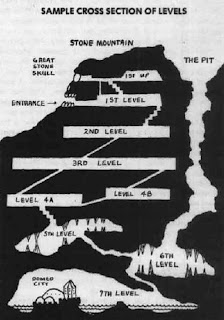 Part of my evil plan is to get closer to the above by adding sub-levels into Stonehell. Level 1 is not as high on treasure as I'd like so I intend for there to be another dungeon on the B2 wilderness map (probably Tomb of the Iron God) to allow a "breather" session outside of Stonehell with some XP and gold. And there are several other modules I'd like to use as sub-levels, particularly Rob Kuntz's Bottle City deeper down, and if Allan Grohe ever publishes it, his interpretation of the Black Reservoir from Castle Greyhawk. I'd also like to be able to fit in some of Matt Finch's work, particularly Demonspore which is made to drop into a dungeon.

But the real megalomaniac in me wants to do something much weirder: specifically I want to stick part of Anomalous Subsurface Environment into Stonehell. That's right, a megadungeon in a megadungeon. I'm thinking of accomplishing this by using part of ASE level 2 as a sub-level and then having level 3 instead of a chunk of level 3 in Stonehell (specifically the "monster dorm" quadrant). I think this would benefit both works: ASE is really weird in comparison to Stonehell, and it scratches my science fantasy itch without having to go live in gonzo-land full time. It's going to take a bit of figuring but as I see it I have time.

I'm very interested to see how this goes. The whole concept of using someone else's megadungeon and modifying it really appeals to me, since the base work of building a big underground complex is already done. And I think it fits well with the ice cream cone approach I outlined - you take something that is a good base and you add other flavors to it to make harmony, rather than either going full-on chocolate or vanilla.
Posted by Wayne R. at 12:19 PM