A Lord in his Castle 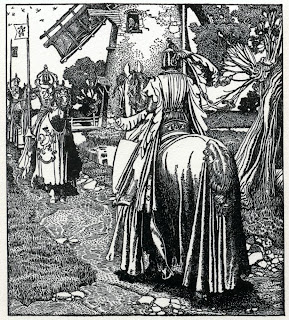 As I indicated in my last post, when characters come across a castle in OD&D it is possible that a fighting-man will come out and challenge them to joust. This refers the reader back to Chainmail, which has some pretty simple jousting rules (a combination of rider position and aiming point determines what happens). I find this interesting in one minor sense: it implies that Chainmail is more important than some interpreters of the original rules have made it.

Talysman on the OD&D board pointed out that this brings a bit of Arthuriana to the setting. There are random knights and damsels scattered liberally throughout the OD&D world, and it's possible for a hexcrawl to look like something out of Le Morte d'Arthur, where PCs are challenged by random knights; one would hope to expand this to include being insulted by dwarves, and variously petitioned by maidens and noble ladies alike.

What's fascinating to me are the "guards / retainers" in the castle. In addition to Swashbucklers, Myrmidons, and Champions (that is, fighting-men of 5th, 6th and 7th level), a Lord or Superhero in a castle can be served by griffins (spelled "griffon"), giants, rocs or ogres. Griffins and rocs are ridden by Heroes (4th level fighting-men). This makes a lot of sense given the setting: random encounter tables often bring out "flyers" which include everything from chimerae to dragons to balrogs.

But when you consider that A, fighting-men challenge PCs to random combat, and B, some of these fighting-men have a stable of rocs or griffins, and C, The Underworld and Wilderness Adventures dedicates three whole pages to aerial combat, this should be going somewhere a bit more fantastic than the little jousting table in Chainmail. Specifically, PCs should occasionally be challenged to an aerial joust by these fighting-men.

It also implies that there are some aerial defenses. There is a specific reference to "sling-ended catapults" - which I'd think implies a trebuchet - uses a load of small stones in a birdshot-style fashion, creating a spherical hit area. For castles without flying defenders, this is probably the main form of immediate defense from marauding dragons, balrogs, and so on. It's also stated that bombing is part of aerial warfare; basically this is equated to the largest stones that can be thrown from a catapult. Bombardier rocs, then, would be able to drop boulders on troops or fortifications in an attempt to crush them; this can deflect left or right, short or long, or both.

Little wonder that this is such a hardscrabble world! You don't just have to worry about overflights from pteranodons and balrogs and dragons, but sieges get into bombardment from above. It's interesting that this is well and thought of in OD&D's castle defenders, since it's a frequent complaint that castles would be useless against wizards and dragons; but if the castle's defenders are dropping boulders on wizards and using trebuchets to knock the dragons out of the sky, things start to make a lot more sense.

It also makes the Charm Monster spell a lot more essential - the next time you run into a roc, you should try and make it your party fighter's mount instead of killing it. That is the way it's done in the OD&D world.
Posted by Wayne R. at 10:21 AM