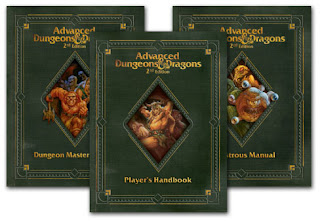 A lot of detractors look at the Old School Renaissance and old school gaming in general as some kind of weird nostalgia trip. It was never that way for me, because I was born about ten years too late for early '80s D&D to have any nostalgia value for me. The first RPG book I ever purchased was the AD&D Second Edition Players Handbook, although I was utterly confused by it until I played through the introductory solo adventure and then a single session game of the 1991 Dungeons & Dragons basic set (the "black box" set with Zanzer's Dungeon and lots of cardboard standups). After that, I ran and played in AD&D second edition in a continuous string of campaigns through middle school and high school, including Forgotten Realms, Greyhawk, Dragonlance and Al-Qadim games. The last 2e campaign I played in was a Dark Sun game that converted to 3e and then fell apart right after that was released. I never converted to 3e.

Now AD&D second edition is getting the premium re-release treatment. Unfortunately it's going to be using the awful "2.5e" versions. Released in 1995, these do not contain any rule changes, they are just new printings of the books that had poor full-color art throughout – the original printings had full-page paintings but most art was either black & white or blue.

Later in high school, when I got into Greyhawk, I switched to the first edition DMG. That really was what got me into old school gaming, as well as (via the famous Appendix N) reading more sword & sorcery and less crappy Dragonlance tie-in novels. It seems cliché to say that Leiber, Moorcock, Anderson, Howard, Vance and Lovecraft are favorites of mine, but quality shines through.

The fact that 2e was basically written to get Gary Gygax's name off the cover and stop paying him royalties has always irked me. I like certain things about 2e, for instance I thought THAC0 was fine, and showed which of my friends were good at doing subtraction in their head. Its initiative system was actually one of my favorites, and when I ran I used 2e style initiative with weapon speeds, spell casting times and all. There's no segment crap in 2e, just 1d10 + modifiers, and it worked really well in practice. The proficiency system is terribly lame but I've always used d20 roll-under attribute checks; it just works smoothly.

Second edition was a world of missed opportunities and bad priorities. The Dungeon Masters Guide was damn-nigh useless, because all the good advice had been cut and moved into the DMGR books. Nobody told us at the time, so we just had a book full of neat magic items that told us to be extremely stingy with them, and a game with a ton of combat rules that told us not to use them either. 2e never was comfortable with dungeons and made dragons so big that they were not realistic enemies - so you were left with a game called "Advanced &."

The game lines of the time had some really good worldbuilding. Most of it went to waste, though. Dark Sun was a neat idea for a world that was immediately turned upside-down by metaplot. Greyhawk got trashed and then got a pretty neat revamp only to be cancelled because senior management hated Gary Gygax. Forgotten Realms, which in the 1e releases was not an awful setting, was ruined by a stream of absolutely sub-par releases. Planescape was marred by the awful "cant" writing and the bowdlerized names of the demons and devils. Birthright was an excellent setting that got tied to a bad set of domain management rules and sunk by the worst business model ever, trying to sell modules for individual PC realms. Ravenloft was a cliché storm, and Al-Qadim had some solid releases, but was a limited line.

The problem was, second edition AD&D was never ambitious. It had no direction, and got very badly bloated by supplemental material. The "2.5e" Player's Option books were uneven and wildly mixed in quality; Skills & Powers was guaranteed to break campaigns while Combat & Tactics introduces 3e-style fiddly combat; the spell point system in Spells & Magic didn't work but some of the classes and new spells were okay. Modules got very railroad-heavy, and dungeon design degenerated into the straight lines that were later seen in 3e. The game wanted to be a generic high fantasy RPG but was still loaded down with baggage from the dungeon crawling first edition.

So I'm going to pass on the second edition reprints, the first real "nostalgia" books for me. The basic rules aren't awful and would do in a pinch, but I have them; and for me the nostalgia is mostly about trying to hack a game that didn't work like the books told you to run it.
Posted by Wayne R. at 10:09 AM