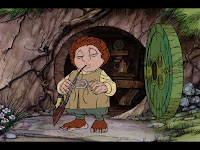 I usually spend a bit of time talking about the mythic history of various monsters and races I'm discussing. But you know where the halfling comes from, it's obvious. In the 5th printing of OD&D and earlier, they were called hobbits, and "halfling" is a word that also appears in Tolkien's published writings. It's a patent gloss and frankly I refuse to give it any credibility, much less the attempts by WotC editions of D&D to reimagine them.

So is it weird that hobbits are sort of benevolent versions of the Daoine Sidhe? I mean, both are an old, diminutive race of beings, who live in hollow mounds, and have faded as humans come into being. The "people of the mounds" indeed - but Tolkien who had a soft spot for the faerie race tamed them and made them proper domestic English people. They reflect his idyllic vision of a pre-modern society instead of proper faeries, just like his elves.

Whereas elves are a people who live on the edge between the mortal and faerie worlds, in danger of slipping into it as they grow in power, hobbits are the faeries who chose the world, and diminution, and ultimately mortality. The hobbit communities are indeed built on the "mounds" of rolling wild plains, and individual hobbits can seem essentially like short humans. But there is another side to them.

Every hobbit is in some way "fae-touched." (This is a whole category of abilities and drawbacks in Demon-Haunted Lands.) The most common manifestation of this is their ability to go mostly invisible in woods or underbrush, or even difficult to see in other surroundings. This semi-invisibility is common but not universal; other hobbits have abilities similar to the druid spell faerie fire or the ability to charm animal on natural creatures.

While hobbits are largely civil and polite beings, they have a love for riddles and tricks and minor traps. This is why hobbits make such proficient burglars, after all. (And seriously even if I ran B/X I'd allow hobbit thieves.) But their idyllic and rural lives are periodically interrupted by the Wild Hunt, which seldom happens even once in a lifetime for most hobbits. In this ancient rite their latent bestial fae side comes to life and hobbits change, growing horns or otherwise becoming part fae as an elf. Unlike the elf's fae marks, for hobbits these things change back over a period of weeks and the hobbit becomes "normal" again - but diminished and lessened, often losing any will to do anything but tend to their homes and gardens. The Hunt itself is a mass frenzy the likes of which no human has ever experienced, pure joy singing through the blood as the chase is joined, followed by the rapture of the final capture and kill. No one who is the target of a Wild Hunt has been known to survive.

So the next time you see a homebody old hobbit, remember - he may have seen things you can only dream of.
Posted by Wayne R. at 9:39 AM