So as a brief bonus for S&W Appreciation Day, here's the Grug Beetle from Dungeon Crawl #2 adapted for Swords & Wizardry: 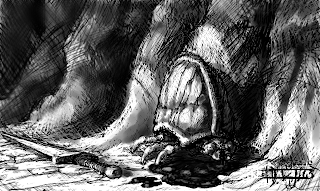 The grug beetle is a giant beetle about 1½’ long found only in underground environments, and feast on carrion and excrement found there. Their hard carapaces are similar in color to the floors or walls of their habitat, growing more so as they reach maturity, when they seem to “blend in” with their surroundings. This allows grug beetles to surprise on 1-3 on 1d6.

Grug beetles are most notorious for their oily secretions. A character bitten by a grug beetle, or touching the trail they leave behind, must make a saving throw (add +2 to the throw). For the next 4-24 turns (1d6x4), characters failing this roll become horribly clumsy and take -2 to normal attacks, -4 to missile attacks, and are unable to perform thieving skills or cast magic-user spells.

The nest of a group of grug beetles will be constructed from the sort of detritus that often exists in caverns and dungeons, and is saturated with its oil. Attempting to sort through it will inevitably result in a character being exposed to it. Grug beetles are highly territorial in their areas and will be natural enemies of other insects and vermin of the dungeon.