The sixth [level] was a repeating maze with dozens of wild hogs (3 dice) in inconvinient [sic] spots, naturally backed up by appropriate numbers of Wereboars. - Gary Gygax, April 1975 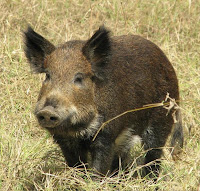 Original D&D gave the simplest possible guidelines for large animals, saying hit dice vary from 2 to 20 and armor class from 8 to 2, with the 20 HD being given for an example of a Tyrannosaur. Clearly the referee was expected to be able to think up such stats on the fly; hence Gygax's only reference to the wild hogs of Greyhawk as having 3 dice (i.e. hit dice).

I've always been a little torn on how well I like that approach. On the one hand it has simplicity and freedom that makes preparation a breeze; you just need to write down two numbers and boom you've got an encounter. But on the other, it has so little variation that everything runs the risk of becoming bags of hit points, now shaped like a wild hog, now like a bear. I prefer a sweet spot at a medium between that approach and AD&D's hit routines and the havoc they wreak on its already complex initiative system.

But Gygax's use of wild hogs reminds me that outside of things like giant rats, wild animals in the dungeon are under-utilized. They work on a few levels: a food source for the other inhabitants of the dungeon, encounters that are potentially non-hostile, and the opportunity to make things just a bit weirder.

If you ever go to the Hawaiian island of Kauai, one thing you'll notice is that there are a LOT of wild chickens on the island. At some point in my gaming career, I think I want to freak a party out by having a chicken in a dungeon. Not the vicious chicken that was infamous in my high school game (which I'll get to in a minute) but an ordinary egg-laying chicken. Wild animals provide all kinds of potential for sidebars to larger adventures; they could, for instance, use the chicken or its eggs as fodder for some bartering with the more intelligent denizens, or keep it as a pet, or even just let it walk around an empty room to see if there are traps. (It beats having to find a new henchman.) In a pinch, they might have their own dinner.

As you go deeper into the dungeon, the weirder it gets. That's the rule of the dungeon as mythic underworld, and it should apply for animal encounters as well. So by the third floor, a chicken hatched may have teeth; on the sixth dungeon level it may be demonic, and if you hatch it on the weird science fantasy level maybe it's a mutant chicken with eye lasers. That's similar to the high school story: when the players saw that some leaves thrown on an altar they had found to an evil god caught fire, a smart-ass player decided to crack an egg. So naturally it immediately sprouted a giant, evil, flaming, regenerating black chicken of death (conveniently abbreviated as GEBFRCOD). The chicken possibilities may in fact be endless.

This pattern should continue with larger creatures. At the earlier levels, they should be territorial rather than actively hostile. Avoiding combat should be totally possible. But when you get lower, the wild hogs are clearly under the influence of chaotic types and the dungeon-as-mythic-underworld itself, and are perhaps inherently corrupted themselves. I think that a subsystem / reference chart for this would be very useful, so anyone who wants to do one for Dungeon Crawl #3 please call dibs in the comments.

To open the floor: what have you done with wild animals in your game?
Posted by Wayne R. at 9:52 AM