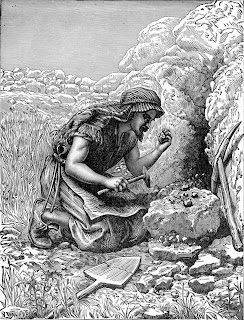 I've been thinking a lot about the idea of hidden treasure, particularly treasure in rooms that don't have monsters in them. In OD&D, there is a 1 in 9 chance that a room will have no monsters (3-6 on the first roll) but have treasure (1 on the second roll). Clearly these aren't lying about in the open; U&WA says:


Unguarded Treasures should be invisible, hidden behind a secret door or under the floor, locked in hard-to-open strong boxes with poison needles or deadly gas released when they are opened. (There are many variants of the above possible, and many other types of protection which can be devised.)

Given the above parameters, one in nine dungeon rooms should have some interesting feature that conceals or guards treasure. I had a PC in my pick-up game on Saturday fall into a pit trap triggered by removing a jewelry box from a treasure chest. A Stonehell PC was recently killed by falling rocks triggered by taking silver from an open bowl.

It's obvious why treasure isn't lying open; if it were, someone would have taken it by now. In a dungeon, there are really three things that should make getting at a treasure difficult: it can be dangerous, time-consuming, or in a genuinely obscure place. Chests with false bottoms, money sewn into the lining of a robe, jewels at the bottom of a particular empty wine cask - there are dozens of possibilities for valuables to have been hidden. PCs with treasure on their minds will think nothing of laying a room to waste, knocking through floors, ripping apart furniture, searching through trash - anything for a gold piece.

Consider the Nobel Prizes that were dissolved in aqua regia to hide them from the Nazis during World War II. This could be a great way to hide gold, or even a magical item, if you have an alchemist who can reconstitute the item afterward. People will go to tremendous lengths to hide wealth.

I think in some cases there should be hiding-places that PCs can conceivably discover more information about, rather than sitting around tapping every stone for hollowness. For instance, say a wall has not one but ten hollows, to to deter would-be raiders from stumbling upon a hidden treasure. Perhaps a long-dead body elsewhere in the dungeon has a note among its possessions with nine "X"s and one "O" - that could be pieced together to find the correct hiding spot. In general, I think that this should be a reward system for good exploration. At the same time, other treasures should only be discovered by pure gumption, having been hidden generations earlier by someone or something who never got to go back and find them. Of course uncovering them is time-consuming, and raises the probability of a wandering monster, particularly if you're using a hammer to take out dungeon wall stones.

One last type to consider for today is the places that will be instinctively avoided by PCs. For instance, a perfectly good treasure could be at the bottom of a pit trap - even one that had been carried by a previous unlucky delver. Stick a green slime right on top of the treasure, and stick it in a fireproof box, then plan to flame it off.
Posted by Wayne R. at 7:15 PM