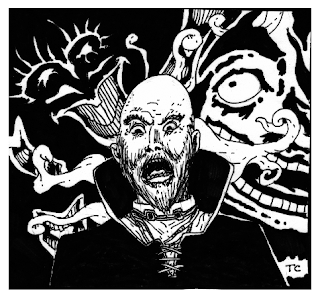 Dungeon Crawl #3 is about to be released! Here's what the issue will feature.

- The Dungeons of Xenopus, Level 2 by Wayne Rossi.
This old-school dungeon is a follow-up to the famous sample dungeon presented in the 1977 Basic Rulebook edited by J. Eric Holmes. Featuring cartography by Dyson Logos!

- The Iscaldean Badlands by D.L. Johnson
A desert sandbox in a region corrupted by magical experimentation.

- What Trap Charts? : It's a Gas! by Wayne Rossi
Charts to liven up your gas-based traps.

- Ready Reference: Populating the Empty Room by Wayne Rossi
Charts to give variety and color to your empty dungeon chambers.

- A Knight in His Castle by Wayne Rossi
Presenting an old-school encounter with a knight and his retinue.

- Thinking Like a Fantasy Character by Dave Przybyla
An article for players based on observations from Byzantine history.

- New Monsters by Wayne Rossi
Two types of beastmen and a crocodilian horror to people your dungeons and hexcrawls.

- Blood Witch by Joshua de Santo
A new class for Swords & Wizardry or any old-school fantasy RPG.
Posted by Wayne R. at 9:53 AM