It's Wednesday, so here's a fresh cryptozoological monster written up for Swords & Wizardry. 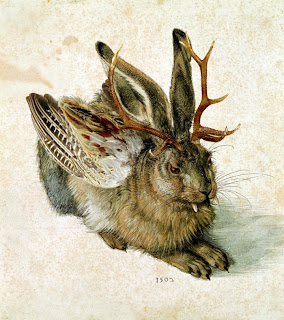 A wolpertinger (pronounced "VOHL-per-ting-er," with a hard g) is a chimeric hybrid creature. Smaller wolpertingers have the body of a squirrel, while larger ones have that of a rabbit. All such creatures have long jagged fangs, antlers, and bird-like wings. They live in dense, temperate forests and hunt alone or in small groups.

In combat a wolpertinger prefers to use its teeth to attack; it will only use the antlers if cornered. They prefer to use their mobility to sneak away and attack prey unprepared.

Wolpertingers will mate with ordinary squirrels or rabbits, and the offspring will not show such characteristics until it is mature, at which time it turns viciously on other "normal" animals of its type. They seek out the company of other wolpertingers, though squirrel and rabbit types never mingle. Their antlers seem to determine status.

In areas where wolpertingers live, a stuffed and mounted sample is a tremendous prize and will be displayed with pride as a sign of good fortune by inn and tavern owners. Providing such an intact corpse (cannot be killed by any large weapon or spell such as fireball) to a tavern owner who does not already have a wolpertinger mount will win such esteem and gratitude that the hunter will not have to pay for his own drinks for the next year; the tavernkeeper and the regulars will sponsor all the beer he can quaff.
Posted by Wayne R. at 8:42 AM