It's Wednesday again. This is an ancient cryptid, with roots going back as long as any monster, in legend living in Central Asia and reflected in Greek, Indian and Chinese stories. 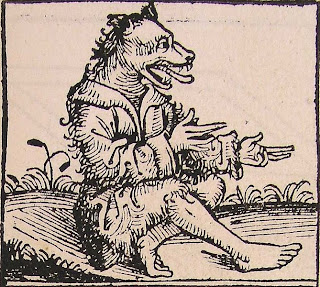 Cynocephali are primitive, dog-headed relatives of humans. They are not considered humanoids or lycanthropes, and have canine heads but completely human bodies, including their hands and feet. These dog-headed men live in tribes like packs, and speak their own language which includes a series of barks and growls, and is difficult for humans to speak. They are inherently chaotic and live in a winner-take-all society.

The leader of a cynocephali tribe has 3 HD and has 1d4 2 HD bodyguards. Generally, cynocephali will fight with weapons but prefer combat that is close up enough to bare their teeth. When attacking with their powerful bites, these dog-men attack at +2 due to their savage fury.
Posted by Wayne R. at 2:50 PM