Raptor Feathers and Dinosaurs in D&D 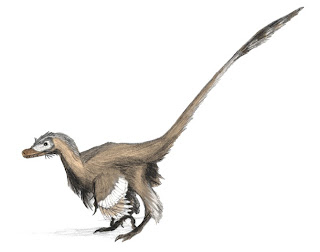 Dinosaurs have been present in Dungeons & Dragons from the very start. The sample "large animal" in Monsters & Treasure was the Tyrannosaurus Rex, which has 20 HD. They are prevalent in the wilderness tables as well, and I wrote about them in my OD&D Setting series (see here for the specific entry). It's hard not to think of these as slow, lumbering dinosaurs that filled the imagination before the "Dinosaur Renaissance" of the 1970s and afterward.

Having grown up in the 1980s as this image was changing, and having been obsessed with dinosaurs as many a grade school boy will be, I can't help but see this and want to at least augment it with a more modern view of quick, feathered bird-like dinosaurs. And seeing as how it's the 20th anniversary of the film of Jurassic Park, it seems appropriate to talk about Velociraptors and how they're awesome D&D critters.

There is a quick and easy triad of raptors: Velociraptor (pictured above; contra Jurassic Park, is quite a bit smaller than a man and would not even come up to waist height), Deinonychus which is a bit bigger but still not the Spielberg raptor, and Utahraptor which is actually a bit bigger. A Velociraptor is a great surprise beast, because in context it's so damn weird: this is an overgrown chicken with teeth that leaps up and attacks with its massive hind claw. We also know now that they had the kind of nodes that would in fact grow feathers, much like their modern avian relatives.

Now, despite the letdown over the relative size of the Velociraptor, we do get the solace that it's fast. You don't get called "velociraptor" without being twice as fast as the fastest human, so once you see the angry chicken-predator you won't be able to outrun it. Its movement should be at least 24", or 240 feet. Fast. Obviously that can be a big advantage.

The stereotype of dinosaurs as being rather dull seems to hold true even after the Dinosaur Renaissance. Velociraptors should be somewhat less intelligent than chickens - if they were scientifically accurate. And that works for your dumb, slow lizards of the pre-1970 view, but it fails for modern dinosaurs. It's a fantasy world, so why not have Velociraptors be as smart as the pack-hunters of Spielberg's films? Working a doorknob might be going a bit too far, but with modest gains they could be pretty smart creatures.

In combat, Velociraptors have the ability to do a pincer where one menaces from the front and a second comes in from the flank with its vicious claw attack. I think they'd have a bonus to damage versus non-armored opponents since the hind claws are quite nasty. The idea that something very very fast is hunting you and could charge in at any second, can create terrifying encounters. Even though they're from the desert, I like the idea of sticking them underground; being warm-blooded, Velociraptors could be quite happy in a dungeon with abundant prey. And hey, what's Jurassic Park without the encounter with the raptors in the visitor center?

As I see it, a Velociraptor should be a modest 2 HD or so, with an armor class around 7 or 8 for its feathery hide. Deinonychus can go up to 3 HD and Utahraptor to 4 - both with high land speeds. This creates an interesting and different dinosaur encounter without the 20 HD Tyrannosaurus to worry about. So: go ahead, throw a raptor in; it will certainly keep players on their toes.
Posted by Wayne R. at 1:35 PM