Sure, it was probably a hoax - but the one your players face won't be. Here's the Ozark Black Howler for Swords & Wizardry, as part of our regular Cryptid Wednesday. 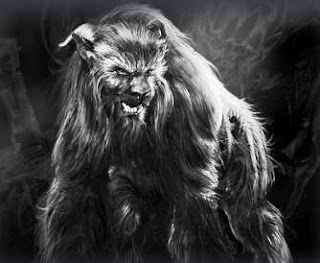 A black howler is a large creature, somewhat bigger than a great cat, that stalks mountainous areas far from civilization. Its shaggy hair is jet-black and it has two prominent horns that are not typically used to attack because of their backward arch. Black howlers are solitary creatures and are exclusively nocturnal, allowing them to take advantage of the darkness. They will surprise on 1-3 in 1d6 instead of the typical 1-2.

The cry of a black howler is a truly awful thing, and when it is made, all characters within 20' must make a saving throw or flee in horror as per the Fear spell (60% chance of dropping carried items) for one turn. It will generally use this before a fight to drive off as many opponents as possible.

Black howlers are not social aside from mating, and will almost always be encountered alone.
Posted by Wayne R. at 7:24 PM