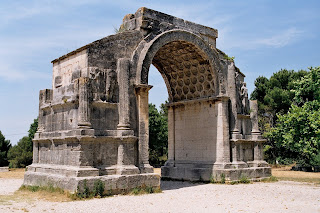 I've started working on an idea for a sandbox and multi-level dungeon. The inspiration is from old Roman catacombs (there are some pretty amazing maps out there) beneath an old abandoned Roman city near a backwater modern village. I'm thinking that Glanum in the South of France as an inspiration for place, and possibly using the Albigensian Crusade as a setting to have some high-level drama with a local component (heresy and all that).

Which is all well and good. Where I'm a bit torn is whether this module should be set in the actual Languedoc or in a fictional analog. James Raggi stuck his Better Than Any Man in historical Germany during the Thirty Years' War, and I think it works fairly well as a module. But there is an automatic feeling from "we're in historical Europe" in games I've run there that I'm not sure I want to evoke in this particular sandbox (which I am hoping to eventually get into shape as a proper module).

Some excellent fantasy literature has managed to be set directly on earth. Adept's Gambit is a novella set during the Seleucid rule of Tyre, rather than in the traditional Lankhmar of Fafhrd and the Mouser. C.L. Moore's Jirel of Joiry and Clark Ashton Smith's Averoigne stories take place in medieval France just as my sandbox, complete with fictitious towns and provinces.

It has certain advantages, as I discussed in the "Dark Age Dungeons" article in the second issue of Dungeon Crawl. You get the richness of medieval Christianity, although that is sometimes a step too far for some people. There's a whole world of culture that you can draw from, although it also restricts you from being able to freely make up as much.

What I'm wondering is whether a thin veneer of pseudo-history might better serve the overarching goal of a flavorful setting while avoiding getting bogged down in details about reality. For instance, because it's inspired by an area that spoke Occitan (sometimes known by the name of one of its dialects, Provençal), French names would be wildly historically wrong in a real-world setting, but in a fantasy analog of France, I can use French names which would give it a much more recognizable flavor.

Simply for my own running, being able to make up churches (and a conflict similar to the Albigensian Crusade but different) would be a major bonus. Too much Christianity is a bit off to me, and the devil-worshiping goat-men could also be a race of demon-worshippers. It lets us detach a bit and insert a good amount of extra "fantasy" into this process.

I also think this is easier to fit into another fantasy setting. Languedoc is specific, whereas my pseudo-France will be much more ready to slip into an already established world. The labels easier to change, the references less baked in by nature.