A French cryptid for the second Wednesday in August. 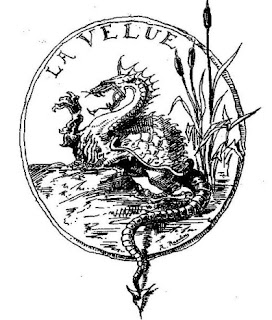 The peluda is a creature about the size of a full-grown bull, with the head of a dragon. Its underbelly contains a mass of what initially appears to be hairs, but are actually quills that are hanging limp. It can straighten and fire these quills (up to 10 feet) at a victim, who must save or be slain by the powerful venom they contain. The peluda can also spray a stream of superheated water at up to 4 characters for 3d6 damage (save for half).

Peludas are vicious creatures that roam the countryside and raids stables. It is actively hostile to human life and will particularly target young and innocent humans. They do not speak any human languages, and will always react with hostility to humans. When killed, the salvageable venom from a peluda's quills will fetch 1000 GP from assassins, or less reputable wizards and alchemists.
Posted by Wayne R. at 7:01 PM