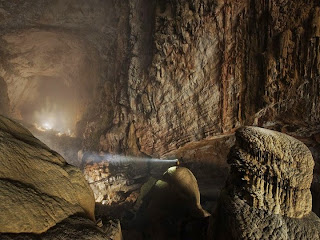 The size of the Son Doong cave, in Vietnam near the border with Laos, is massive. Its largest chamber is 5 kilometers long and 150 meters wide. It has massive stalagmites 70 meters tall. Almost 500' wide and over 16,000' deep is almost unfathomable. But it makes me think about huge underground areas. (Technically Son Doong is not all underground; a hole has burst through its roof and there are plants growing in parts of it.)

There are two parts to what I'm going to define as a monumental chamber. First: a person standing at one point and using a torch cannot see the edges of the area. A torch occupies a circle 30' in radius, or about 2827 square feet. A 60'x60' room is the smallest such monumental area; at 3600 square feet it has around 1.5 times the square footage of an average house. The second criterion is that the monumental room has multiple entries in the dungeon key. A room that is huge but empty doesn't count.

A monumental chamber is a gripping idea to me, mainly because of its sheer scale. Frequently they will be much more than the average 10' high, and as often as not will have some support, whether in columns or through a stable structure like a dome. Vast caverns can shift elevation even within a single room; a manmade version of such might have several platforms linked by stairs. The monumental room is open to pedestals, megaliths, gaping chasms, cliffs, lakes, rivers, waterfalls – any of the geographical features you've always wanted to use in a dungeon but can't fit without making the room humongous.

Inhabitants, too, need not be single. Sure, you could fit an entire orc tribe inside of a sufficiently large chamber. But a truly large room could be home to multiple entities, particularly if it has niches, alcoves or other defensible areas. Perhaps humanoids come out to harvest mushrooms, or crystals, or some metal, while other creatures live in a secluded area. This is particularly potent if the chamber is very high and has multiple effective levels. Bats and stirges, among other types of flying things, are prone to live in the upper reaches. One idea I've always relished is giant bees with a hive up at the top of a chamber at least 50' high. Lower levels, a sub-floor or a body of water all create other natural divisions for multiple encounter types. The sheer size can encourage a whole miniature ecology.

Huge rooms can house multiple wonders as well. Natural features can be spectacular, as can megalithic sculpture and large-scale architectural designs. At the same time, you have some interesting options. If you've ever been to the Metropolitan Museum of Art in New York City, you may have seen the Temple of Dendur – an Egyptian temple inside the museum. There's likewise a small Japanese temple in the Philadelphia Museum of Art. Massive caverns can logically have multiple sub-caverns. A monumental chamber can be a dungeon room with other rooms inside it. 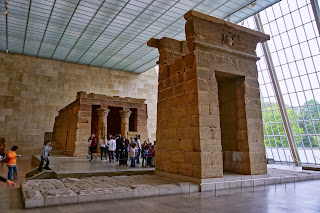 The monumental chamber is also a great way to link several different levels together. Entrances can be at multiple heights; a chute from one level, a landing leading down from another, a third on the same level as the floor, or a fourth with a chute or stairs leading down to a deeper level. They make great "crossways" of the dungeon where wandering monsters can come from a variety of original dungeon levels as well.

I feel that I'd be remiss if I didn't mention that dragons are naturals in such areas. A truly massive hoard needs a massive room to fit in. But generally I think that, especially in megadungeons, it pays to think big. (No, bigger than that.)
Posted by Wayne R. at 8:51 PM