The Other Free Basic Rules 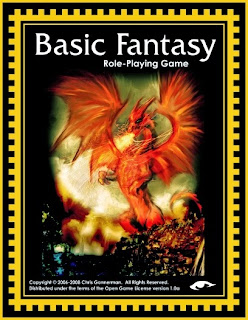 A lot of people are going to get a set of free basic rules today. I want to encourage people to check out Basic Fantasy RPG, which is a totally open-source project and is completely, 100% free. BFRPG has been free since 2006, and is a clone of B/X without race-as-class.

There are a lot of clones that have come after BFRPG, including the more B/X-like Labyrinth Lord, but I've always liked BF's straightforward split of race from class. It does a good job with the straightforward nature of ascending AC, and breaks up characters into narrower bands for gaining to-hit bonuses, which makes everyone slightly better at fighting. But it doesn't get into the comically high armor classes of 3.x. And if it gets rid of 1 XP per gold piece of treasure as a rule, it's listed as an optional rule and is easy to restore.

What was important about Basic Fantasy when it first appeared in 2006 was simple: here was a game that declared, with capital letters, "This is OLD SCHOOL." That was awesome. It was a shot across the bow: this was saying that the old school play that had been dismissed in favor of the new "latest and greatest" was a valid way to play the game. And in 2006 it was considered more or less acceptable to dismiss and ridicule the way that people had played D&D in the '70s and '80s as being primitive and/or foolish.

Basic Fantasy has had great community support, and J.D. Neal's modules are excellent takes on the standards created by B2 and X1. There are supplements to add whatever you like to BFRPG, and plenty of free resources from the community. The second bold move on the BFRPG cover was to put a disclaimer: "Don't Buy This Book!" By making BF totally free, Chris Gonnerman created an atmosphere where the game's fans have given generously and openly. I think that's an awesome thing for him to have done.

A third thing was accomplished by BFRPG that isn't usually recognized: it was the most compact single-volume version of the game when it came out. Basic Fantasy is only 154 pages when you include the index and Open Game License. That's quite an accomplishment. Labyrinth Lord is about 19 pages shorter, but that's still no mean feat. Both are also in more readable fonts than the Basic and Expert rulebooks, hence the longer page counts.

If you wanted to run a basic game tomorrow, Basic Fantasy has all the tools you could want. If you already know the rules, it's also worth checking out the adventures and supplemental material. I particularly like The Chaotic Caves, a B2-style module that would be fun for people who've played the original Keep too often and know all its secrets.
Posted by Wayne R. at 4:11 PM