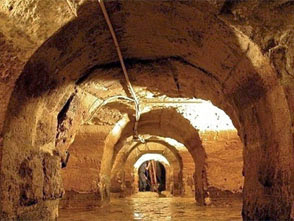 The galerias romanas (Roman galleries) in Lisbon, Portugal are one of the harder architectural marvels to get into. A crack in one of the galerias means that the underground ruins are accumulating groundwater, and most of the year, they are flooded. Every year, the ruins are painstakingly drained (the process takes a full month) and visitors are allowed to enter for about 3 days. The rest of the year, the water is allowed to stay, at about 3m depth (10').

Which is a fun way to transition to talking about water in dungeons. Homeowners know all about the tendencies of underground spaces to accumulate water; we've invented sump pumps, French drains and all sorts of systems to reverse this tendency. But in dungeons it's a fascinating obstacle that I've thought about for a while now.

The first thing you have to decide about water is whether it is flowing or stagnant. If it is flowing underground, there must be some source: a river, spring or aquifer that is feeding the body, and a corresponding outlet. If there were no outlet, the body of water would continuously rise. (This is certainly a possibility: an extremely slow rising body of water, fed at a rate of well less than half an inch per year.)

Stagnant water has been deposited by some source and is not continuously refreshed. This is extremely dangerous to humans, since stagnant water is a breeding ground for disease and bacteria. Contact with a pool of such water should require some kind of appropriate disease checks; suitable rules exist in Blackmoor, the Dungeon Master's Guide and Lamentations of the Flame Princess. Drinking it is even more dangerous.

After that the next decision is depth. Water becomes a different type of obstacle depending on the depth. A foot deep permits more motion than two; three might be navigable for humans but is swimming territory for halflings. Deeper than that becomes a serious problem, if not totally impossible to cross. Water, of course, ruins most of the things adventurers carry; waterlogged boots can get mildew or mold, and generally become useless, while soaked torches or spellbooks are useless. Swords and armor will rust if not properly cared for. And swimming while in armor is basically impossible. Watch the video if you don't believe me – heck, even if you do believe me, it's a great experimental video.

Other factors can also be interesting: temperature, current, or brackishness. For instance, clear, cool water is very different from hot mineral spring water. In a dungeon near the sea, some water may be salty and undrinkable. And it could be very dangerous if the water has a strong current, pulling adventurers along with it as they try to navigate it. Varying any of these can create unique environments and pose certain challenges.

Now that we've put water into the dungeon, comes the payoff: all the water monsters in D&D are fair game. From sharks to sahuagin, from ixitxachitl to aboleths, and any kind of new monsters based on fish or whales or anything else you like, you've now got a reason to use these in dungeons. A long-standing version might have a blind cave version of the classic lake monster archetype, or vicious schools of piranha, or pretty much any cave swimmers you might imagine. It's a rich environment for monsters that aren't typical. And let's not forget about amphibians, arthropods and the like.

Of course where there are monsters, there is also treasure. This can be a bit tough to figure out. In chemically pure water, basically, copper, silver and gold should be relatively unaffected by corrosion. (In fact, copper coins in fresh water should tend to reduce the bacterial load.) The problem is that water is not pure and contains other minerals and compounds that will interact with metal. It could also complicate things if the coins are not pure metal. Seawater will corrode copper and silver coins, but leave gold fairly intact. Only acidity, introduced by the breakdown of wood or the general condition of sandy soil, would pose much of a danger to gold coins. The most dangerous thing would be an untreated wooden chest containing them.

Most gems will not be water soluble and should survive pretty well in tact. But iron is toast even if it gets minor exposure, as are most books or scrolls (leather parchment will be ruined and the ink will dissolve), and pretty much any wooden objects that aren't covered with tar, pitch or some other sealant. Magic items are the referee's call; it would be interesting to find a shining steel blade in a rotting leather scabbard and with a ruined handle, but the blade and tang in tact. Potions may or may not leak, which could have very interesting results – say, a wizard's laboratory where several potions have mixed together to form ... well, pretty much anything you want.

Water complicates everything very nicely. Spells will be interesting, from Sleep (does it turn into an effective Drown?) to Lightning Bolt and others. A Fireball might boil some of it. And of course there are many interesting spells and items that only work under water.

Given all these possibilities, it's a disappointment that there aren't more modules and books dealing with flooded environments. It's definitely something I keep intending to explore. I hope this inspires other referees to do the same.
Posted by Wayne R. at 4:59 PM