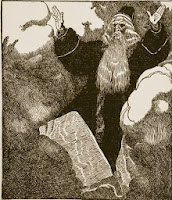 Most of the changes to the initiative system in Supplement III: Eldritch Wizardry and first edition Advanced D&D had basically one major goal: making it so that a spellcaster could be hit in combat and stopped from casting a spell. The rules for this got infamously complicated. The best way to start a fight at Dragonsfoot or Knights & Knaves Alehouse is to make some blanket statement about how 1st edition initiative really works. Unfortunately it's one of the more important things that OD&D, Holmes, Moldvay and the RC (I would presume also Mentzer) all lack in any way – by the book there is no way to interrupt someone who is casting a spell.

I think it's very important that this ability exist in the game. It takes spellcasters down a notch (often quite literally), but more importantly it can be the PCs' best line of defense against an enemy spellcaster. If you can't interrupt his Sleep spell, well, a low level party is screwed. Generally it's a good defense against casters being overpowering and gives parties a fighting chance, but I don't like AD&D's rather difficult way of achieving it.

Swords & Wizardry has a simple system. Spells being cast start at the beginning of the round, and go off on the caster's initiative. So if a spellcaster loses initiative and gets hit, this interrupts the spell. Easy peasy. There is a more complex method that involves taking a full round to prepare a spell, at which point the caster can be interrupted by damage, and once readied the spell can be cast when the magic-user is ready. Not quite as easy.

Adventurer Conqueror King expands this to damage or failed saving throws interrupting spellcasters. Lamentations of the Flame Princess puts more or less the same rule in different terms: if a character takes any damage in a round, they can't cast a spell after that. It's not a proper interrupt, but it serves basically the same purpose.

OSRIC has a cleaned-up interpretation of the AD&D rules, while BLUEHOLME, Labyrinth Lord and Basic Fantasy RPG just follow their Basic versions in neglecting this area.

The interesting choice here is how Swords & Wizardry and ACKS both assume that the spell is specifically interrupted and lost, while LotFP merely forbids spellcasting once damage is taken. The former approach is harsher on the magic-users, to be sure, and rooted in AD&D, where being hit can likewise cause spell loss. Neither proposes any kind of roll (such as a saving throw) to see if the spell can be kept; it is simply gone. I think this is a good compromise between the harsher S&W / ACKS approach and LotFP's method.

Another possibility I haven't seen explored much is that the attack causes a misfire of the spell. This is always a good excuse to pick your favorite "haywire spell effect" table and roll on it, to reflect the magical energies that have been let loose by the incomplete incantation. These should be used sparingly, and perhaps only have a certain percent chance (maybe 5%-10% per spell level) so that it doesn't devolve into complete unpredictability.

Whichever is your favorite, I think these are the most straightforward spell-interruption rules out there, and deserve consideration for any OD&D or classic D&D game.
Posted by Wayne R. at 7:47 PM