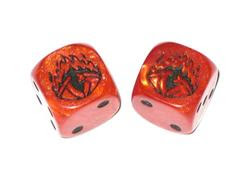 "Don't ask me what you need to hit. Just roll the die and I will let you know!"
- Dave Arneson.

One area where I find a surprising amount of diversity in gaming is in how, exactly, the dice are rolled. More specifically, some referees roll the dice in front of their players, or even have the players roll pretty much all the dice.

This couldn't possibly contrast more with how Gary Gygax and Dave Arneson ran their games. Arneson narrated from behind a screen that physically blocked the players from seeing him. Gygax hid behind a file cabinet. Players didn't know the dice rolls they were making; hell, they didn't know the basic rules of the game. Everything that didn't appear on their character sheets was a mystery.

In my games, I sometimes ask for a specific roll - "roll for initiative" or "roll to hit." But frequently I'll just ask for a d6 or a d20 roll, with no indication of why the player is rolling. I find this works best with the attitude of "rulings not rules," as I may have simply made a determination of a percentage, or a chance in 6, or a roll-under-stat roll, or one of a dozen other simple ways.

During exploration, I roll a few dice per turn, mostly six-siders. The function of these dice vary; sometimes they're the Eye of Sauron that indicates wandering monsters, or rolling to see if the PCs hear anything or notice secret doors; other times I'm rolling on some arbitrary chart or just rolling a die and seeing what comes up if I need to make some random decision. None of this would work with open rolls.

Running this way, I find that the dice – for me as a referee – perform a sort of oracular function. Most of the time they produce a sort of low-level background randomness, but sometimes their results turn out something that combines with PC interaction to be sublime. One die roll can transform a whole evening of play. That's part of why I am very much in the "let the dice fall as they may" camp.

On the other side, I look at it simply: if you get into a situation where we have to roll the dice, your PC's life is in the hands of the dice gods. Again, the dice fall as they may; you may win glory or die in ignominy. Fortuna is not always a lady.

One of the best parts of this approach is that it lets me borrow tons of stuff from different sources. On any given game night, there is a stack of books on my desk (or table on the rare occasions when I get to run in person) ranging from the Ready Ref Sheets and the 1e DMG to a list of 10-20 other books I keep mainly for the charts and tables. Part of my vision of D&D is that I don't have to be bound by any particular edition beyond keeping the rules for PC stuff fairly straightforward and stable. That's part of why I like my current B/X game: I can borrow anything I like, but the players have simple and well defined rules for their characters.

And of course that means killing other games / editions and riffling their pockets for spare change, hence my current project in looking at the clones.
Posted by Wayne R. at 10:19 AM