Better Living Through Clones: The Cost of Armor

As other people are talking about the new edition of D&D, I want to start taking a look at the way that different classic clones handle things. Generally it will focus on finding things that are tweaked by the clones in ways I like. I'm starting with the cost of armor. 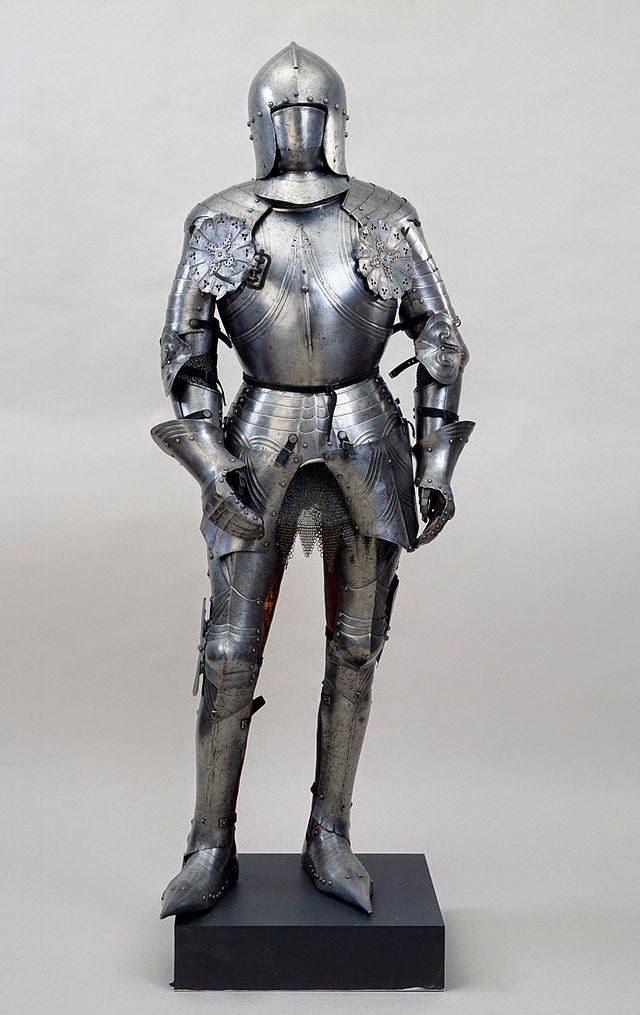 In original Dungeons & Dragons, leather armor costs 15 GP, chain costs 30 GP, and plate costs 50. Given that PCs rolled 3d6x10 for starting gold, it was a given that most fighters would be able to afford plate armor. (It's not plate mail. That's a mistake of 19th century writers that Gary propagated into the 20th and 21st. Mail is chain armor.) After an adventure any PC should be getting it. Encumbrance is really the only reason to use chain or leather.

Holmes kept the OD&D prices, while Moldvay moved it up a bump: leather is 20, chain 40, and plate 60. Mentzer and the Rules Cyclopedia keep this distribution. AD&D adds a whole bunch of armor types, many of them mythical or silly (such as studded leather and ring mail). Leather is only 5 GP, while chain goes up to 75 and plate to 400 GP. This meant that most fighters started with such ahistorical armor such as studded leather or ring mail, or if they rolled well they could afford scale armor or mail.

(And yes, I'm being pedantic, but there is no evidence that ring armor was actually used; it's mostly a misinterpretation of medieval depictions of mail, or chain armor, which is not called "chain mail" because that's redundant. And putting metal studs in a leather coat is a fashion choice, and would have no defensive value.)

For most of these, the result is that starting fighters will wear chain and carry a shield (generally equivalent to AC 4). But Dexterity can improve AC, in most of these up to AC 1 – a step better than OD&D even allows – and with AD&D style bonuses, even AC 0. OD&D and Holmes conversely have AC 2 fighters and clerics wearing plate armor unless they're really poor, or really need to be sneaky.

After a lot of experience, I find myself in favor of the higher prices. PCs start with 3d6x10 GP or some number around that in most of these versions of the rules; I know Labyrinth Lord goes higher with 3d8x10, one of its many quirky switches that is there to avoid actually being a photocopy of Moldvay and Cook/Marsh. Despite the cheap cost in B/X, as a sop to at least minimal realism I require six weeks for the manufacture of a suit of plate armor; it was a difficult and time-consuming process that involved fitting the plates precisely to a cast model of the eventual wearer. (So don't gain weight!) Actual medieval armorers could take months fitting plate armor together, but if your life depends on it, aren't you going to want it as well made as humanly possible?

OD&D implies that it takes an armorer (100 GP / month) a month to make a suit of armor, or two with assistants, yet the armor only retails for 50 GP; maybe it's a loss leader? If we extrapolate from this, the Basic Fantasy prices are actually pretty on the money, while Labyrinth Lord's are a bit inflated. Generally I find this setup preferable, because it focuses on core armor types and doesn't add in a bunch of fake ones that Gary Gygax pulled from inaccurate 19th century sources.

Dexterity makes it possible for a mail-wearing 1st level fighter in BFRPG to be as survivable as his plate-wearing OD&D cousin. BFRPG also exaggerates the weight of armor a bit less than OD&D does, which is another point in favor of its equipment list. I'm sure there were Renaissance suits of ceremonial plate armor that weighed around 75 lbs (as in OD&D), but a well made suit shouldn't really be much over 50 lbs (the weight in BFRPG). This, of course, does make enforcing encumbrance rules important, but that was always supposed to be a mitigating factor of different armor types.
Posted by Wayne R. at 10:53 AM