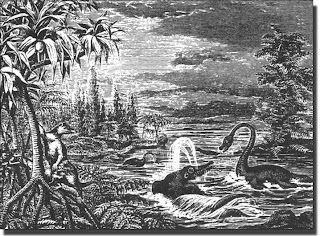 The swamplands in OD&D are hardly as prolific as the forests that surround them; on the map there are only two swamps of any size. Both are large and fed by rivers, so we can say that they are freshwater wetlands; both are bordered by forests and should be considered as proper forested swamps and not reedy marshes, which likely exist in the river hexes. The southwest swamp is dominated by a castle, while the northeast swamp only has the fork of the major rivers in the area.

Every move there is a 50% chance of becoming lost and moving in a random direction, making travel particularly treacherous. Visibility is poor and there are few permanent landmarks; only the rivers can realistically be used to navigate them safely. As we'll see, I think this makes the deep swamps a particularly tricky environment.

Swamp encounters have a 25% chance of undead, and as such it's likely that the castle in the southwest swamp is that of a Necromancer or an Evil High Priest. It should go without saying that if you see a body in the swamp, it may not be at rest, and a zombie or ghoul that doesn't have to breathe could wait for weeks to find prey by hiding in the shallow waters of a swamp pool. Mummies and vampires are a bit more out of place, but a burial ground in the swamp might have some above-ground tombs reminiscent of the ones in New Orleans that could house these types.

The encounter tables also list the horrible "swimmer types," which include giant crabs, octopi, squid, snakes, leeches and fish, as well as crocodiles, mermen, nixies, sea monsters and dragon turtles. Logistically these would have to come at points where the rivers intersect with the swamps and make deeper than usual waters for habitat. Crocodiles and giant snakes being par for the course as you are going through the wetlands. Nixies are particularly nasty - rather than being physically violent, they try to charm opponents and enslave them.

It's worth talking briefly about OD&D mermen here: they are described as similar to berserkers but fighting at -1 on land. Clearly these are not mermaid-style creatures, and this is further verified in Supplement II: Blackmoor, where mermen are described as riding giant seahorses. This is a very far cry from the fish-tailed mermen that Gygax codified in the Monster Manual, more Namor than anything. They should be fearsome raiders into swamp and river territories, though - presumably eventually going to their far-off ocean homes.

But the big shift in the swamps proper is what lurks in the "optional swamps" table for animal encounters. There is an oddity in the charts - such that there is a sub-head for swamp animals, but no listing within the swamp encounter chart for "animals" that would trigger it. Obviously these are encountered somewhere, and I would suggest that it's best to substitute "Animals" out for "Swimmer" where there is no river in the swamp hex, meaning that dinosaurs are only found in the deepest reaches of the swamplands.

The inhabitants of these deep swamps include tyrannosaurs, pterodactyls, triceratops, brontosaurs (not yet changed to apatosaurs) and stegosaurs. OD&D has no entry whatsoever for any of these monsters, but given their location it's not entirely off-base to think that they represent the view of dinosaurs as lumbering, slow, lizard-like reptiles. This hints at a Lost World type of area, where swamp dwellers are at risk of tyrannosaurus attack. The potential interactions are fascinating: humans riding dinosaurs, an encounter interrupted by a tyrannosaur, hunting a wild brontosaurus. There's also the possibility for an Arzach type of character, riding on a giant pterosaur (assuming that the listing didn't limit us to smaller proper pterodactyls). Or of an animated tyrannosaurus skeleton.

Swamps are also the home of the black dragons, which take on their familiar aspect of acid-breathers who are less stupid than white dragons but not as wily as the other types. These are much more comfortable in the swamp, like the dinosaurs, and their lairs are likely to be the most fetid corners.

For humans, the swamps are difficult and treacherous lands. Travel through them is slow and difficult, and they contain possibly the most threatening types of encounters. It is a true land that time forgot, a treacherous place where you are as likely to meet a zombie as a tyrannosaur. Venturing into them is not for the faint of heart, and one should have a cleric as well as a strategy to face the dinosaurs and river monsters.
Posted by Wayne R. at 10:08 AM