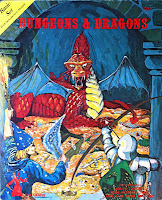 On the OD&D community for BLUEHOLME (an excellent simulacrum available free here) I came across this article, a review by J. Eric Holmes of the 1981 Dungeons & Dragons boxed set edited by Tom Moldvay. It's mostly positive, but Holmes says this:


Character classes: Player characters are restricted to being a Fighter, Cleric, Thief, Magic-User, Elf, Halfling or Dwarf. This probably covers the roles most beginning players want to try, but I am personally sorry to see the range of possibilities so restricted. The original rules (the three little brown books) specifically stated that a player could be a dragon if he wanted to be, and if he started at first level. ... I enjoyed having dragons, centaurs, samurai and witch doctors in the game. My own most successful player character was a Dreenoi, an insectoid creature borrowed from McEwan’s Starguard. He reached fourth level (as high as any of my personal characters ever got), made an unfortunate decision, and was turned into a pool of green slime.

Holmes's own rulebook lived up to that in a minor way, where he talked about other AD&D classes such as witches, illusionists, paladins and assassins. I also like where he mentions "a lawful Werebear" - seeing as werecreatures were part of the early D&D scene.

But at the same time, the more proliferation you have of varied classes, the more you run the danger of getting bogged down in the details. I think the challenge with taking OD&D and Holmes Basic is to add variety to the game without crowding things with rules; even the supplement classes have a bit of bloat on them relative to the pure simplicity of the basic three of fighting-man, magic-user and cleric. The dragon and the Dreenoi give examples, as does the Werebear - these do not need new classes with convoluted mechanics to represent them. The key, I think, is in OD&D's exhortation to start small and work up.

The werebear, for instance, is immune to non-silver weapons, has HD 6 / AC 2 / Damage 3d6. Maybe a PC werebear is only able to transform once a day for limited time at low level, and the numbers start low and advance with level - until at 6th level, they're equal to what is listed. Further growth continues along similar lines.

Not that this is all hypothetical - I have issues of Alarums & Excursions with similar tables for various creatures. But I think it's a lost art, one of many that we have lost over the years, in favor of an approach of building out too many classes. I might write up rules for playing a werebear in the next issue of Dungeon Crawl as an example, and I'd be interested to know what folks have been doing in this regard if they're playing OD&D, Holmes or some other old-school game or clone.

As an aside - Holmes is either wrong or the essay is mildly revisionist. The original rules mention playing a balrog, not a dragon. This was excised in the sixth printing ("Original Collector's Edition") which is also the basis for the PDFs that were (however briefly) made available a few years back.
Posted by Wayne R. at 10:16 PM