In the Savage Mountains 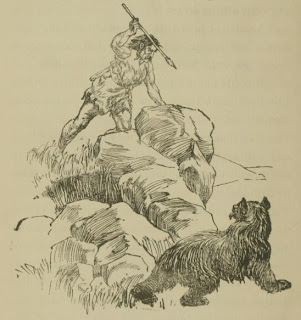 Mountains are one of the more plentiful terrain types in the Outdoor Survival map that is the presumed setting of original D&D. There is a nice big range in the north and center, and both the northwest and southeast quadrants of the map have what appears to be several ridges. In Snorri's map which I used in the start of this series, there are several high mountains in white. These are probably old mountains, more like the Appalachians than the Rockies. There are six castles in the mountains (one third of the castles), and these must be hard fortresses that use their natural defenses to good effect. Most of the castles with flying defenders will be in the mountains, for logistical reasons.

The mountains run with giant types (which includes humanoids, ogres, trolls, giants, and demihumans), and dragons, each being 25% of the encounters located here. Giants proper will, naturally, live in the mountain ranges, probably with various and sundry followings; there will be hill and stone giants in the caves as well as frost giants in the frozen mountains, and possibly a cloud giant castle. Other goblinoid types are probably making forays from caves deep within the mountains. Elves are the out of place encounters here.

Dragons living in the mountain range will be primarily red, although the colder northern mountains may have a few white dragons as well. The dragon chart also includes cockatrices, basilisks, wyverns, balrogs, chimerae and hydras - all of which could well be native to the mountains. This is in addition to the flyer list that includes dragons and balrogs already. Combined with the giants, we need a pretty good cavern system to support these creatures; the mountains must nearly have an underground wilderness beneath them.

Under the "Men" listing we find cavemen, the only place where they appear in the encounter lists. Cavemen in OD&D are 2nd level fighting-men, wielding clubs the equivalent of morning stars but fighting at -1 to morale. Their primitive state is indicated in Neutral alignment. Given the media of the time, it's probable that these are meant as fur-wearing Neanderthals, with primitive communication and limited technology. These are hardscrabble cavemen, who compete with various magical beasts, monsters and paleolithic predators for their living space. It's no surprise that they are bigger and stronger, but canny enough to run when cornered. If you're facing a balrog there's no reason to stay and get killed.

The animal listing for Mountains is well suited to cavemen: there are cave bears, dire wolves, sabre-toothed cats (called tigers in the OD&D books), mastodons, spotted lions, woolly rhinos, titanotheres and mammoths. What's funny is that despite it being a very common trope at the time (for instance One Million Years B.C.), these cavemen are mostly distant from the dinosaurs and don't interact with them. Mammoths and mastodons make fine prey species for humans as well as the many predators of the mountains.

As with swamps, mountains are slow going, but it's harder to become lost in the ranges, and if you look, other than the north-central range, a lost party will fairly shortly find themselves outside the mountainous area; it's not hard to get to lowland if you look. In the movement rates, we also see an interesting wrinkle: the dragons can cover 24 hexes per day flying, which would get them about 2/3 of the way across the map, so a dragon could hunt 12 hexes away from its nesting area and return in a day.

Mountains are savage terrain; human toeholds barely tame them. The hardy few who live in mountain castles are seen as the defenders of the lower realms. Of course, where there are dragons there is rich treasure, and many foolhardy adventurers go off into the mountains never to be seen again...
Posted by Wayne R. at 9:50 AM