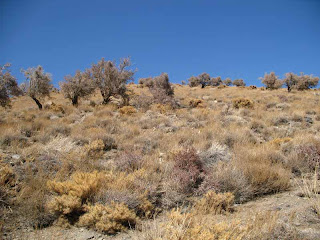 In the Outdoor Survival map there are two deserts to speak of. One lies in the northwest corner, adjacent to some lines of mountains, and continues off the map to potentially more desert. The other lies in the area between two mountain ranges. Geographically, these are probably both relatively cold weather deserts, more similar to the Afghan desert pictured above than the dunes of Arabia or the sands of the Maghreb (North Africa) or the Sahara. The mountain patterns allow for the northwest desert to really be more of a steppe region, such as the Caucasus (between the Black and Caspian Seas). The southern desert is more likely caused by the rain shadow of the surrounding mountains, which absorb the wet air that blows toward it and makes the desert terribly dry.

OD&D makes its deserts particularly hard to navigate. Characters get lost in it on 1-3 in d6, and can easily find themselves wandering the desert, slowly seeking the way out as they run out of water supplies. It is not as slow going as the swamp and a party lost in a desert has a reasonable chance of finding themselves in the nearby mountains. There are no permanent settlements, either towns or castles, in either desert - indicating that they are not given to civilization at all.

The deserts are peopled, though, by nomads and dervishes. In the standard earthly desert, OD&D lists nomads as being half the encounters with humans, and the dervish type is similar enough. Random encounters will only run across a lord or a wizard, probably in transit. Nomads are the logical choice, and their mix of bowmen and mounted soldiers is generally accurate to classical and medieval dwellers who would have lived in the Caucasus or Central Asia. Dervishes are nomads who are amazing fighters, similar to berserkers, and religious fanatics. Not to mention that they've got terrific headgear. My feeling is that there are probably at most two or three groups of each, one to two for each desert. 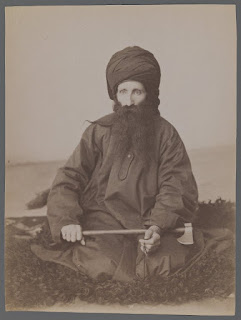 Blue dragons are the native flyers here, and there is something particularly satisfying about having a lightning-based monster be at home in the sand and dirt of the desert. Either desert would make a fine hunting ground for red and white dragons (at home in nearby mountains) as well. A "giant" listing (including humanoids, giant-kin and demihumans) rounds things out, which leads to the very odd result that ents could well be encountered in the deserts.

At this point the referee needs to make some choices about the deserts. The "Arid Plains" listing contains a number of Barsoomian creatures - Apts, Banths, Calots, Darseen, Orluks, Sith, Tharks, Thoats, and White Apes. Likewise the "Desert" listing under men contains Red, Black, Yellow and White Martians, as well as Tharks, listed in parentheses for "Mars." So a referee may interpret that Martian creatures and/or the races of Barsoom are also found in the deserts. The alternative, using the basic Animals chart, simply seems sadly dry and inappropriate, resulting in things like giant toads and wild boars.

If we assume that only the "Optional Arid Plains" listing applies, it uses Barsoom for some instant desert dwellers. Some feel appropriate, such as the reptilian Darseen (which may vary greatly in size and HD) or the insectoid Sith; Banths would be the terror of the desert lands. Several are polar creatures on Mars, such as the Apts, Orluks and the White Apes, but could live in the northern of the two deserts. Given the general aridity of Barsoom, perhaps some long-lost portal allowed the wildlife - and the fierce green Tharks - to migrate out into one or both of the deserts. They make it instantly an alien-dominated environment. Tharks also have the ability to communicate telepathically, which would have to be worked into the game, and it would have to be answered whether other humans have the immunity to mind-reading that John Carter possesses.

There is also some potential for cross-over here; the nomads, for instance, could have started to herd the Thoats they encountered instead of cattle, or in addition to them. Depending upon your interpretation of Orluks, they might be hunted for their fur. I think in general it may be best to limit Barsoomian creatures to a single desert, probably the northwest one where it tracks off further west and there is land for them to expand upon.

All of this gives us a desert far different from what we might have expected, i.e. a sort of Arabian style land of hot sands, shifting dunes, djinns and efreets, Berber-type nomads, etc. But it's a very rich desert to explore, and get lost in, and possibly discover something even stranger than you expected.
Posted by Wayne R. at 7:38 AM