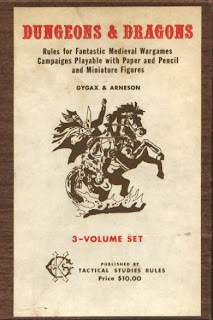 There are unquestionably areas which have been glossed over. While we deeply regret the necessity, space requires that we put in the essentials only, and the trimming will oftimes have to be added by the referee and his players. We have attempted to furnish an ample framework, and building should be both easy and fun. In this light, we urge you to refrain from writing for rule interpretations or the like unless you are absolutely at a loss, for everything herein is fantastic, and the best way is to decide how you would like it to be, and then make it just that way! On the other hand, we are not loath to answer your questions, but why have us do any more of your imagining for you? Write to us and tell about your additions, ideas, and what have you. We could always do with a bit of improvement in our refereeing.

For me, the idea that OD&D had the essentials is important. The material included had been cut severely and Gygax and Arneson left only the framework of an exploration game in there. I think I showed just how much really neat stuff was lurking in their assumptions with the recent series of setting posts. There are other interesting bits in the books: for instance, the weapon list is in order by the length / weapon classes in Chainmail and this can be used for determining who strikes first, as per that game's rules.

The implied motto of "do your own imagining" is a mark to aim for. OD&D seems like a very sparse game at times, but it's built in a way that it's really simple to modify. For instance, a monster needs 3 statistics: Hit Dice, Armor Class, and Movement; even the other three (# Appearing, % in Lair and Treasure Type) are only for generating monster lairs. For instance, per Monsters & Treasure, a Tyrannosaurus Rex should have 20 HD, and I'd think it has 2 AC and a movement rate between 12" and 18" (depending on how aggressive you are with its land speed estimates). Give it an extra die or two of damage for sheer size, and you've got the whole monster. It's a fine framework to sit back and do your imagining.

The framework of OD&D is one with few rules for any specific thing. There is more on treasure than on melee combat, and plenty on exploring dungeons and wilderness. Certain areas of rules - aerial combat, naval combat - are covered because they weren't already in Chainmail and read as explicit expansions to it. Chainmail with its weapon reach and morale ratings is close by OD&D, but it is never invited to be the center with its man-to-man combat table. The sheer complication of later editions prevents them from being tinkered with so readily; OD&D was basically morphed into Runequest by successive changes.

TSR and the D&D community moved rapidly away from this paradigm. Modules were accepted, more complicated rules promulgated, and within 5 years TSR was pronouncing AD&D to be the final word. The OSR has never quite gotten there, since much of what we share is TSR-style modules. I'm running my own campaign based on someone else's dungeon and it's fun but it does feel like it's missing the element of my own creation, which is why I think I've been keen to reinvent bits of Stonehell. I like modules for the ideas but I'm convinced more now than before that they're better read, or played as one-offs.

So I want to spend another post or two talking about things in OD&D that I like and bits that I think can be changed or expanded.
Posted by Wayne R. at 9:37 PM