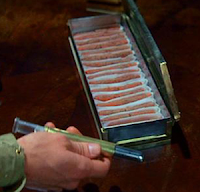 In my last post I touched briefly upon the Spice, Melange, from Frank Herbert's Dune. Anyone who knows the Dune universe should know that the Spice is addictive, to the point where not using it means death. It has me thinking about the myopic late-era TSR Commandments, specifically this one:

Narcotic and alcohol abuse shall not be presented, except as dangerous habits. Such abuse should be dealt with by focusing on the harmful aspects.

This forecloses on the ability to make really awesome, but addictive, magical substances. And so, like many of these rules, I think it should be defenestrated.

Both Dune and Dungeons & Dragons came about in an era when people still thought of drugs as mind-expanding. Of course this crashed and burned in real life - but since when does fantasy have to follow reality? If drugs are really gateways into alternate worlds or ways of seeing reality, why not depict them in both positive and negative aspects?

One thought is that the fantasy world may have powerful hallucinogens that, rather than simply showing delusions to the viewer, actually reveal elements of the truth. Magic mushrooms or psychoactive substances like peyote may, in addition to rollicking hallucinations, impart upon the user the ability to detect magic or detect invisibility as per those spells. Deep in a trance, a character may be able to use spells such as ESP, clairvoyance, or clairaudience. Of course, side effects and addiction should both be likely.

Another drug might empower magic use further, allowing the user to cast spells as if they were a certain number of levels higher - for instance, a 5th level Magic-User casting an 8-dice fireball. Such impact might follow the typical "de-escalation" pattern of a mundane "high," where achieving the same result requires more of the drug. There could also be the danger of burnout, with the user needing it just to cast spells that have been over-optimized.

I might do some of these as magic items in the next Dungeon Crawl. Any thoughts?
Posted by Wayne R. at 11:30 AM