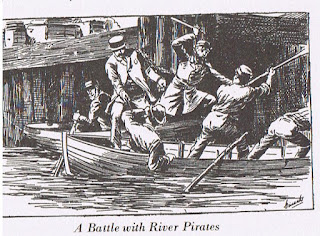 The Outdoor Survival map is dominated by a river that forks at the north swamp and cuts down across the terrain. There is just a single city that actually sits on the west river; this should technically be the largest of the various towns, since it is the one that would logically have access to trading opportunities upriver. The east river is overlooked by a castle in the mountains, which form a neat valley around them, but has no towns. This valley is probably one of the richer areas under a castle's control, and pays corresponding good rents to its lord.

It is faster to travel by river than any other method in OD&D, and parties rarely get lost. However, getting out to the north requires spending a day going through the swampy terrain, even in a fast galley. Trade with the lands north requires most of a day to reach the swamp, a full day to clear it, and less than a day to get north of the map. From the castle to the southeast exit takes a bit more than a day in either boat or galley. It remains up to the referee if there are trading opportunities downstream to the southwest - the rivers appear to get narrower there.

River lands are almost entirely plains, except in the swamps and the west river which touches on forest hexes at a few points. Since the river is likely less than a half-mile across, most of the hex should follow the "normal" wilderness rules, only switching over to the "river" charts when actually at the river. This should follow Waterborne for actual on-river encounters with men, and the local area for animals.

The "Waterbourne" (sic) chart lists Buccaneers three times, Pirates (like Buccaneers but always Chaotic) twice and Mermen once. As I mentioned back under swamps, Mermen seem to be bipedal humans who live underwater. Buccaneers are Bandits but on boats, and are either footmen or crossbowmen. Pirates are Buccaneers but they're Chaotic. River pirates prowl these waters, probably hoping to harass merchant galleys travelling north. There may be a toll at the castle on the east river if it is clear of piracy.

All such piracy is likely to be of the grapple-and-board method, with small boats being used by the pirates or buccaneers to come up alongside and the crossbowmen giving fire support to the lightly armed and armored men fighting their way aboard the target ship. Large vessels may use catapults to attempt to smash through pirate boats, but largely we're talking about the need for armed guards on each ship.

Swimmers are a freakish lot, and most of the listed swimmer encounters (25% of river encounters) will be horrors you would expect in the oceans: giant squid, giant octopi, giant crabs, sea monsters and dragon turtles. The giant leeches are frightful swamp types, as are giant snakes and crocodiles, and all are well out of their normal habitats. One thing this tells us is that the river is deep to be able to accommodate these creatures; there may be points where it is 200-300 feet deep, and correspondingly quite wide at that point.

One curiosity is that giant squids are quite real in our world, and have a bit of a following on the Internet, but their flesh is high in ammonia content and totally inedible. However, the people in that one town along the west river may find that giant crab claws make a delicious hearty meal for a whole family. This also allows the referee to handle these as animals rather than pure monsters, and a giant squid is not necessarily out to re-enact every movie scene we've ever seen with a kraken.

River travel is the safest thing in OD&D simply because of its speed. A boat full of buccaneers or pirates is much easier than what you'll find on a swamp, and this world's ships must go with armed guards. But when you do hit a monster, it's likely to be a fierce one.
Posted by Wayne R. at 10:20 AM