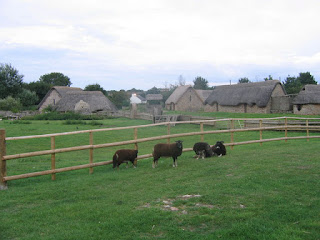 Clear grasslands and cities are the least unique of the terrain types in OD&D. Most of the cities and towns sit in grassland hexes, and grasslands are the most numerous single type of hex. They provide the default background against which the other hex types stand out.

The list of "basic animal" encounters gives us a listing of animal types including spiders, scorpions, lions, boars, weasels, toads, apes, ants, centipedes, snakes and beetles. A note tells us that animals will "usually be of the giant variety," which means we have a world populated by giant scorpions and giant toads. Lions, boars and apes don't need to be giant as badly as the ants and spiders do in order to be threatening encounters.

It is somewhat strange to have the toads and centipedes and snakes and apes all in the clear grassland; of course they're all available in other types of terrain as well, but this table is the only one that makes up "clear" land encounters. Judging from the terrain, the animals may be better picked as wanderers from nearby areas: apes from the jungle, giant frogs from the swamps, giant scorpions out of the deserts and so on. Except in the northwest and southeast corners, almost every grassland hex is less than 3 hexes (1 day of travel) from a forest, swamp or mountain hex, so this is always workable. Perhaps giant ants (with suitable underground caverns) and some types of snake are "native" to the grasslands but little else.

The map gives us no indication of roads through the grasslands. If there are paths between the towns indicated, they must pass through forests or over mountains except for two towns in the center area. One of those towns is the only town on a river, which is a natural fit for the main commercial city of this region. Looking at the layout again, the five towns in the center of the map are relatively well protected by castles on different sides, and it is possible that the four closest ones form the only kingdom in the territory. Alternatively, the city in the woods could be an elven city and the others are the human cities that trade with it. Each town outside of the core five is somewhat peripheral to the map and may be more of an outpost or a frontier town.

These are towns that are separated by enough difficult miles that except for the four core towns, trade is probably difficult and extremely limited. This explains, FWIW, why trade goods in D&D are so damnably expensive: each town is basically running a frontier style economy, far from major centers of commerce, and even getting a shipment of goods through these lands requires an armed escort. As I said in the post that opened this series, these will of necessity be small towns, probably walled, with small out-populations supporting them.

Encounters in towns and cities are limited to two types: Men (fighters, clerics, wizards, brigands and bandits) and Undead (the whole classic list). They are literally half and half, so each town must have some fairly active necropolis attached to it, and the population must bar themselves indoors at night. Banditry and brigandage in the towns, and undead, are obviously combated to some extent by the humans who are also wandering with their retinues. These encounters are rarer than other locales, so it must be that these are simply the exceptional ones. But there has to be some role for the undead - as I discussed under wizard's castles and towers, it may be that high-level wizards routinely create non hostile undead to do their bidding. Brigands and bandits, meanwhile, easily become various toughs and hoodlums, lawless types in the city.

So this is the setting of original D&D: a frontier land, perhaps with a single state in its center, with wilderness populated by creatures of myth, legend and giant creature films. It is a world of Arthurian castles, knights templar, necromancers, dinosaurs and cavemen. It is wild, and it feels profoundly like the world someone who watched every cheesy science fiction movie about giant monsters and every classic horror film would make. This is bolted onto a world with openly Tolkienesque elements - elves, goblins, orcs, balrogs, ents, hobbits - and other entries that quickly became generic fantasy because they were in the D&D books. The result is far more gonzo and funhouse than people give D&D credit for, and I think it winds up being a good mix.

I've really been happy with the reception this series has gotten, and I hope it will make it into folks' games. I will be compiling it all into a pretty basic PDF file in the next few days, nothing fancy, that will be available for free download. Feel free in the comments or on G+ or FB to let me know what you'd like to see next.
Posted by Wayne R. at 9:54 AM