Statues and the Living Dungeon 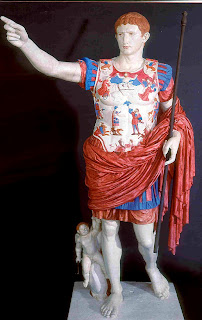 I had hinted back in my post on monsters that turn you to stone that I would do a post on statues; I was working on it but got sick, and once I was feeling better, I sort of embarked on my recent spate of monster posts.

The picture on the right is an attempt to reconstruct what the statue of Augustus at Prima Porta would have looked like when it was painted. Residues of the ancient paints were used to get the gist of what colors were originally present in the statue. It looks surprising in two ways: one, it's much more gaudy than the statues of white marble we are used to seeing represent the ancient world; and two, it's much more human in its countenance. We tend to see them as majestic white marble, but the painted human faces are much more sympathetic. Of course they were painted regularly as a matter of course; it was only art historians who decided that the pure white forms were preferable. I disagree. 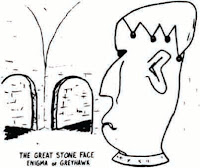 Statues have historically been one of the more important pieces of dungeon dressing. The "Startling Statues" table in the Judges Guild Ready Ref Sheets (you can see the table in a picture here) gives a wide variety of options, and various puzzles and enigmas have long used statuary as their focal pieces. We can think of the "Great Stone Face Enigma of Greyhawk" as a very early example. (You can see some more discussion over at Dragonsfoot.) The illustration makes it appear very similar to the distinctive Moai at Easter Island.

Historically statues were used mainly for religious and political purposes (not that these were always different things). But they were by function extremely public works of art. You don't often make a life-sized statue just to stick in a home. So what are they doing in the dungeon?

In the kobold entry I wrote up yesterday, your typical gnome statue is fully functional: it is there to prevent new kobolds from forming. This works on the view that the dungeon is a "living thing," something that isn't natural and grows of its own volition. There are a few ways that statues can work in this environment, and a few different reasons for them to be there.

As with the gnome statues preventing kobolds, some statues in the first few levels may be placed there to prevent the area from developing further "dungeon" characteristics. These are a bulwark of humanity and civilization in the underworld, an attempt to stave off the growth of the otherness in the night below. With time and interference from the dungeon's fell denizens, these statues slowly erode and are taken to pieces, or become corrupted and magical, part of the dungeon itself. Dwarves, gnomes and human miners build statues in their underground fastnesses in order to stave off the creeping underworld forces that threaten to overtake them. 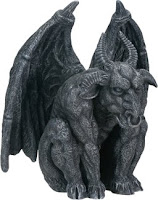 Monsters will do the opposite, and a dungeon should have crude idols and evil figures that concentrate more of the foul energies that change the tunnels and crypts into a proper underworld. They may make strange and often odd curses occur to characters; a favorite of mine is a statue that forces characters to feed it coins uncontrollably until they are physically removed (save negates). Smashing these may actually cause the rate of wandering monsters to decrease. They may also be encrusted with gems, which are handy for a cursed object.

When we deal with crypts it should be clear that some statues will be funerary. These have the opposite effect: the dungeon becomes closer to the world of the dead. Inexplicable fog, or even the animation of skeletons, may be driven by the creation of an elaborate underground necropolis. Images of the dead not accompanied by appropriate holy symbols and wards are likely to become part and parcel of this corruption.

Deeper and deeper in the dungeon we find statues that are not of any human make. These are the most powerfully magical statues, as likely to depict some monster or extra-planar being as a human, and often figure in strange puzzles or have the effects show in the "Startling Statues" table. Such statues are repositories for the magical energies that have built up and do weird things such as looking or pointing in different directions when characters aren't watching them.

Those are a few different ways to use statues in a dungeon setting. I really think they're a fun trope and they offer just too much possibility to let go easily.
Posted by Wayne R. at 10:40 AM