What you fear most

The bogeyman is a figure used to scare small children. It lurks in the shadowy corners and the darkness under a bed, and generally accrues all of the attributes that a child fears. Of course, living in a safe, modern world with electric lights and advanced science, we know that bogeymen aren't real. In the D&D world, why shouldn't they be?

The bugbear was introduced in Supplement I: Greyhawk. They are described as "great hairy goblin-giants." At the end of the booklet there is a picture of a bugbear and a ghoul, which is notable for the fact that the bugbear actually has a pumpkin for a head. There is something just plain nasty about that, that got lost in the later pictures as bugbears merely became yet bigger goblins. They do retain an amazing sneakiness, adding 1 in 6 to surprise rolls, but other than that are just big and either hairy nasties or somewhere verging between creepy and goofy, as in the Monster Manual.

As you may have already known or guessed, "bugbear" is an English synonym for bogeyman. And I think the Greyhawk illustration, much more than later attempts to make a bugbear, hit that right on the head (excuse the pun). Katherine Briggs's Dictionary of Fairies describes them as related to the Celtic bodach, which was more of an old-man figure, and relates that illustrations from the 16th century showed them as being bear-like in appearance.

As with trolls, I think that there should be a great deal of variety within bugbears. Their origin, to me, lies further along the magical thinking path that I've been going down throughout this series on humanoids: bugbears are creatures that are outgrowths of human (and demi-human) fears of things that live in dark places. Just as children fear, their greatest delight is in snatching up humans and putting them in stewpots.

Because they are creatures that grow and thrive on fear, bugbears differ by where they live. In a village, they are under-bed creatures, flexible and able to hide in small secret places, with beady glowing eyes, and all teeth and claws when they are actually seen. In a wood, they may in fact be creatures that are bear-like and can hide as a bramble. Deep in a dungeon, they take on the aspect of larger, hulking horrors. 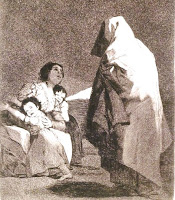 More specifically - bugbears change their specific appearance based on the individual facing them. A warrior who thinks himself fearless may see a bugbear as an invincible fighter; a magic-user may see it as an eldritch thing that has been haunting his nightmares. Clerics may see a demonic face. Henchmen will experience the bugbear as a compilation of all the horrors they have faced and dreamt about, and have a corresponding drop in morale.

Going toe-to-toe with a bugbear should bring out all the sights and sounds and smells that a character dreads; it may have pet snakes, rats, spiders or whatever else the character finds intolerable. Acrophobics will find that the bugbear seems to confront them at the edge of a chasm or high gap, while claustrophobics will find themselves in impossibly close quarters with the beast. In many ways the bugbear's spot on the cursus honorum with 3+1 hit dice is deeply appropriate, since it is just below the level of a Hero. It embodies all the leftover fears and dreads that the aspiring-Hero character still fears. As such, the above "psychological horror" aspect of a bugbear encounter may be dropped entirely for Heroes, or alternately they may be able to overcome it.

That finishes off the classic cursus honorum, since ogres qualify as giants rather than humanoids. It's also worth noting that, since Dungeon Crawl #2 is approaching publication, I am working on a new project that takes the direction of these recent posts towards a magical world full of weirdness and superstition, and runs with it. It will be a sourcebook, tentatively called "Demon-Haunted Lands" (after Carl Sagan's Demon-Haunted World), dealing with superstition, faeries, monsters, and magic based on a mix of traditional folklore and new invention. The humanoids from this recent series will be codified and written-up in full. More details when I have them.
Posted by Wayne R. at 11:28 AM