Old school gaming: better than ever!

Obviously I'm very happy that the second issue of Dungeon Crawl is now available, and hopefully in the coming days we'll see a couple of reviews from bloggers who I've sent copies, and maybe some from the kind folks who've bought them so far. If you check the product page you'll also see that submissions for issue 3 are open for the next two months, so send in your ideas!

Another thing I'm really excited about is Petty Gods. I missed out on submitting an entry when James Maliszewski was running it, but I will have an entry in what Gorgonmilk is currently calling "Expanded Petty Gods (XPG)." A goddess I wrote is going in the same book as something by Michael Moorcock? Crazy awesome. I am so high fiving my teenage self after the time I spent Spring Break plowing through the Ace editions of the six Elric books.

Petty Gods, I think, is symbolic of where things are going in a few ways. First, it's a great community project, and I've always thought that the appeal of the old school renaissance was that we were a community. With Fight On! and Grognardia both sunsetting for all intents and purposes, we've lost big places where that community used to share its ideas, but we have a Google+ group with 1,358 members who can share ideas, discuss games and even play them online. That's even better. 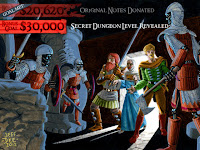 I do have to mention the project that has been the subject of so much discussion around the RPG world, James M's Dwimmermount. This seemed in danger of becoming a project forever stuck in beta, but things have been turned around and it's great to say that it's going to be Open Gaming Content. That's cool if for no other reason than the maps are actually pretty good, even if the dungeon itself manages to miss the mark on the megadungeon having levels that are simply weird and wondrous. Plus the draft will be substantially updated by the folks at Autarch.

Another thing is the reach of the clones, which I'll have more to say about on Swords & Wizardry Appreciation Day. With Basic Fantasy we are literally at the point where $4.62 gets you all the rules you need to play for 20 levels and three adventures are available for $3.59, leaving you with a very complete basic D&D-style package for $8.21, with free shipping. That's pretty amazing. And suffice it to say that I think Swords & Wizardry Complete is a game I think has serious merit.

We are now at the point where a community creation comes out like the Hexenbracken not in months or years, but a couple of days (there's a version here where you can click the hexes to see the description). It's wild and wacky but seriously you could put that thing out as a supplement and it'd be pretty high quality.

Old school gaming is going in a heck of a direction, and I'm really excited about some of the stuff we've seen. And to be a part of what's going on today. If you or someone you know has a project that you're excited about, feel free to talk about it in the comments.
Posted by Wayne R. at 8:28 PM