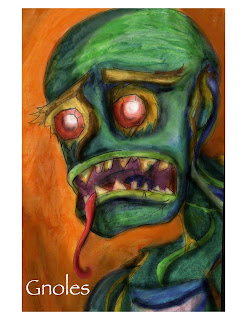 GNOLLS: A cross between Gnomes and Trolls (... perhaps, Lord Sunsany did not really make it all that clear) with +2 morale. Otherwise they are similar to Hobgoblins, although the Gnoll king and his bodyguard of from 1 - 4 will fight as Trolls but lack regenerative power. - Dungeons & Dragons, volume II: Monsters & Treasure by Gary Gygax and Dave Arneson

There's an obvious misspelling in the description above; it is clearly a reference to Lord Dunsany, as Edward Plunkett published his pioneering fantasy stories. Dunsany didn't actually describe gnoles in the story "How Nuth Would Have Practiced His Art upon the Gnoles" but Margaret St. Clair does in her story, referencing the same creatures, "The Man Who Sold Rope to the Gnoles." They are described as looking like a Jerusalem artichoke made of India rubber, with a long thin tongue, a mouth full of fangs, and eyes which are multi-faceted rubies. The unfortunate salesman of St. Clair's story takes the spare eyes of the senior gnole and is enveloped in its network of tentacles (!), fattened, roasted and eaten - but not tortured.

Given the rubbery skin of both the D&D troll and St. Clair's gnoles, it's possible that this is what the "cross between gnomes and trolls" is referring to. Gnolls sit atop the cursus honorum of OD&D humanoids, with a full 2 HD and the highest morale. (The bugbear, with 3+1 HD, comes in Greyhawk and fills the gap between gnolls and 4+1-HD ogres.) Yet they are vague and reference a story that was obscure, and the author's name not even spelled correctly. And the name is spelled differently, to boot.

Fully fleshed out, gnolls become hyena-men. It's a classic sort of D&D-ism, and like most of them, I like it while considering it a bit tired. In a previous post, I talked about orcs taking up this role, although I'm now considering doing it the other way, making pig-man orcs into a special instance of a much larger category of beastmen. This will absorb the AD&D style of gnoll as well, increasing hit dice and so on so that your hyena-men are for all intents and purposes the basic gnoll.

This leaves room for the gnole. We know that gnomes are smaller than dwarves but otherwise similar, and with longer beards. But the gnome as the benevolent side of an earth-spirit that I discussed in my blog entry about kobolds gives us something to work with; gnoles are generally evil like trolls but share the connection to the earth that gnomes have. And trolls, well, they certainly seem to take after the more bestial sort, with skin made of rubber (perhaps literally). The eyes are of particular interest; a gnole's eyes are rubies, and should be valuable gems in and of themselves, but also have some magical properties.

Dunsany's story has the gnoles hiding in trees and looking out knots in them to spring an ambush – creatures after my own heart. St. Clair's gives them tentacles and makes them monsters with tentacles, that are unable to speak or hear, but are literate enough to read the things the salesman writes, and communicate through gestures. They are clearly and totally horrific. For comparison, this is the gnoll from the OD&D booklets:

To me, the outstretched tongue seems to hearken to St. Clair's gnoles – but this is clearly not the tentacular beast she describes, and there is no hint that its eyes are multi-faceted gems. The "out" as far as we are concerned is that St. Clair's description is of the "senior gnole," which is the oldest of the gnoles, and never leaves its house. It is possible that the gnole starts out more like a gnome - more humanoid, with arms and legs, eyes and ears and a proper tongue - and over time it is slowly corrupted into a "senior gnole," the eyes are replaced with gems, the fingers fuse and the arms become tentacles, the tongue degenerates into a serpentine ribbon. All this happens as the gnole ages and gathers wealth. It becomes more ferocious and at the same time never leaves its lair. And I like the idea that all money in a gnole's lair will be in the form of gems.

Of course, once characters take the gems from a gnole's home, they have to deal with their effects. This takes the form of a slow and subtle corruption, particularly if they hold onto gems that a senior gnole used as its eyes.

The humanoid reinterpretations will finish up with the hobgoblin.
Posted by Wayne R. at 11:22 AM