Alchemy, Sages and the OD&D World 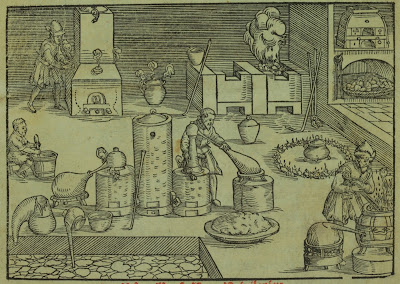 Alchemist: Given a formula, the Alchemist can duplicate it to make a similar potion at a cost of one-half the potion's value. Alchemists may conduct research, but the time and expense are twice that of a Magic-User, and they may only work on poisons.
– OD&D, Volume 3: The Underworld & Wilderness Adventures

Specialists, which have been part of the game since 1974, are one of the more neglected ways to spend money in Dungeons & Dragons. Which is a shame, because they are both a good way to remove excess gold pieces, and a powerful tool for world-building.

OD&D's basic economics don't stand up to much scrutiny, but we can figure the back of the envelope numbers for how much a potion is worth. The listed cost for a healing potion is 250 GP, and it takes 1 week to make one. An alchemist costs 1000 GP per month, so a week is close to 250 GP, making the cost of having an alchemist copy a healing potion about 375 GP. If brought to market, 500 GP is a reasonable price. (This is ten times the amount that the 5e D&D rules list for potions, which are standard equipment in that edition.)

U&WA specifies that specialists are available "to those in positions of power, i.e. with their own strongholds." This suggests an atmosphere like the famous Italian patronage system, where the rich and powerful sponsor alchemical laboratories to their benefit. They are joined in this by the intriguing Sage type, who have the stipulation: "They are employable only by Fighting-Men." This is a curious requirement that fits in with Supplement II: Blackmoor's idea that Sages are regulated by a Guild, which is jealously guarding its knowledge from wizards and priests, who it logically sees as "the competition."

Alchemy was an interesting mix of chemistry, astrology and occultism, influences that play an unfortunately small part in a lot of D&D. I think there's a particular richness to working it into a background – although perhaps not so subtly so that it gets missed. The overlapping alchemical and astrological symbols are a rich visual vocabulary for a D&D game.

One of the advantages of this approach is that it solves the reference problem where the players don't have knowledge their characters should have. By using our world's alchemy and astrology for that of the fantasy world, you create an accessible basis for things like clues, puzzles and riddles in the dungeon that both the players and their characters can and should understand.

Of course you could create your own as well, but it seems intriguing enough to me to insert references to these patterns and ideas in the D&D world.
Posted by Wayne R. at 1:01 PM