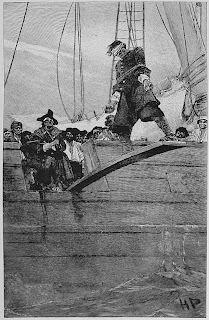 "Buccaneers are water-going Bandits in all but composition of their force...
"Pirates are the same as Buccaneers except they are aligned with Chaos."
– OD&D Volume 2: Monsters & Treasure

In 18th and 19th century admiralty law, the term hostis humani generis was used to describe pirates. It's a Latin phrase meaning "enemies of the human race," and is used to describe the way that piracy was considered a crime against all nations. In practice, it meant that any nation could capture and hang pirates as criminals, even if they had attacked a ship sailing under another nation's flag.

Pirates have lost a great deal of their ferocity in pop culture. A lot of my daughter's cartoons use pirates as lovable, if cranky, sailors who mostly hunt for treasure. Which is a shame, because they're great villains and poor heroes.

OD&D devotes very little space to melee combat between dungeon denizens, but it finds eight pages to cover naval combat. There are well thought out rules for exactly how to conduct warfare between medieval ships crewed by men, and combat with water monsters. These are clearly Dave Arneson's creation, and were neglected in later versions of the game – at best considered a minor set of conditional rules.

The natural setting for using these rules is an archipelago. Islands are great D&D settings, as recognized by the classic module X1 The Isle of Dread. There is a terrific sandbox resource for island campaigns in Judges Guild's Island Book 1, which contains tables for rolling up an island on the fly, and dozens of detailed hex maps of islands. The islands are also the most expressive part of the Wilderlands setting, as each island on the maps has a unique hook provided.

Piracy makes for an interesting cost to an island-hopping campaign. They can be used to make the passage between islands difficult, but if they have a "land base" they can convert readily into a kind of bandits. Pirates don't always need to be disaffected sailors from the main culture, either. "Queen of the Black Coast" by Robert E. Howard features pirates from an African-style setting. The racial implications there are unfortunate, but the basic concept can be made to work with no racial animus. (Indeed, since Vikings are pretty obvious medieval pirates, they might actually be lighter skinned than the main culture.) It also doesn't necessarily follow that pirates have to be human. For instance, many of the tricks used in classic "Tucker's Kobolds" type scenarios would also be effective for taking a ship. And there is just something about a kobold pirate that amuses me deeply.

(A side note: if you want to do some island-hopping but the PCs don't already have a ship, sometimes the biggest treasure for a pirate encounter is ... wait for it ... a ship.)

Outside of pirates, there are heaps of monsters, particularly in Supplement II: Blackmoor, that basically beg you to go to the seas. Basically megadungeons solve this problem by putting the sea under the dungeon, but it is inherently limited and doesn't give you the same variety. The sea is an infinite world of fresh horrors, and if you're like me you've probably wondered why they are included. Sahuagin, ixitxachitl, locathah, morkoths, were-sharks, not to mention the plentiful variations on the sea-monster, both real and imagined, all given less love except in the occasional wet dungeon. The reason they are there is that Dave Arneson wanted you to be adventuring at sea.

Aside from chances to use the naval rules and the many waterborne monsters, island-hopping just gives you great variety. All kinds of different monsters, cultures and ruins can be found in islands, and it all makes a certain kind of sense. You want Vikings or cavemen? Sure. Want the last survivors of lost Atlantis, with corresponding treasure beneath the waves? They've been on that island the whole time. Primeval tribes, lost ruins, abandoned forts, strange creatures are all fair game. No reason that these islands can't have huge magic on them that has gone unexplored – refer to The Moon Pool or "The Call of Cthulhu" for a couple of Appendix N examples. One of my favorite archipelagos in fiction is in Ursula K. Le Guin's Earthsea.

Oh, and if you run a naval campaign, someone gets to be Captain. All sorts of fun there.
Posted by Wayne R. at 11:22 AM