How did these people get into the dungeon? 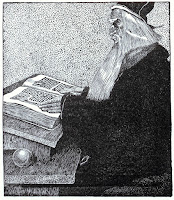 OD&D volume 3's Monster Level tables include numerous human-types in the dungeon, mostly a mix of fighting-men, magic-users and Chaotic clerics. Of the humans in volume 2, only Bandits and Berserkers appear. The rest are listed by their level titles from volume 1, and run the gamut from Warriors (level 2 Fighting-Men) to Wizards (level 11 Magic-Users) and Evil High Priests (level 8 Chaotic clerics).

It's telling that the charts don't contain any Lawful clerics. If you run into priests, they are either Evil Priests, or Evil High Priests with a retinue of apprentices. In typical OD&D fashion, other possibilities include at least a couple man-types: Mermen (who are not necessarily fish-tailed) and cyborgs (who are not mentioned elsewhere).

Dungeons probably aren't suitable places to find dervishes, nomads, buccaneers, or pirates, but it is a bit odd that cavemen don't show up on the monster level table. Given everything else that's in the dungeons, why not a Neanderthal? After all, we call them cavemen because they tended to leave artifacts underground, which seems consistent with the underworld. Brigands are also missing, but they're really just Chaotic bandits.

Supplement I: Greyhawk changes things around. We find various levels of thieves at all levels, and encounter dwarves and elves only on the first monster level. We also get our only Lawful wanderers, as there are paladins roaming about these dungeons.

B/X D&D changes things around, by creating a whole category of random humans to wander around the underworld. Class-leveled characters still appear, but so do Traders, described as armed merchants carrying trade goods. This has potential that simply has never been fully exploited, in my opinion.

OD&D, though, has an interesting wrinkle: the Monster Determination and Level of Monster Matrix. Basically, the monster encountered on a given level might be from the same monster level, or from 1 level lower, or from up to 3 levels higher. The upshot of this is that dungeon level 3 is the only level where you can encounter all of the class-levelled types in OD&D. Level 4 (Evil Priests, Myrmidons, and Enchanters) is the most common Monster Level encountered there.

If we extrapolate logically from all this, the OD&D megadungeon suggests to us at least 3 human factions, and probably more. First, there are both bandits and berserkers, who are likely to appear on level 1 of the dungeon (both monster levels 1 and 2 appear most frequently on level 1). It's possible that one or both groups have a "base" on the first level of the dungeon, or that they are coming from a base camp outside the dungeon entrance. But either way, a classic OD&D megadungeon has bandits and berserkers nearby.

Beyond that there is at least one faction of leveled humans. Lords, Wizards and Evil High Priests – presumably the leaders of any such faction(s) – appear from level 3 and downward, so it is unlikely that the base of any faction would be on the first two levels. Evil Priests are most frequent on levels 3, 4, and 5, so one of these levels is likely to have a Chaotic temple, or at least some kind of idol or presence, in its depths.

Other factions are possible. Any faction with magic-users or fighting-men to it should have at least one outpost on level 3; otherwise, the Warriors, Conjurers and Theurgists in the monster level 2 table would have no "home base." But the faction's leader is increasingly likely to be on a deeper level, suggesting a faction that holds several areas in the dungeon.

This is an interesting challenge for dungeon design. Say that a faction has its "home base" on level 7 and its "outpost" on level 3. There should be a way for members of that faction to get from one to the other without fighting their way through. This may include truces with other factions, or a secret passageway, or a specific "safe" pathway that could also be found and exploited by the PCs.

Beyond these factions, it is of course possible that at least some of the humans are freelance. They may be a "rival NPC party," an idea that has been written about before. They might be traders; some accounts in Alarums & Excursions show that OD&D play did in fact include such oddities as wandering salesmen and religious proselytizers (think '70s Hare Krishna types) as dungeon encounters. Such a dungeon should have "neutral" spaces that are not simply about fighting all the time, and areas where at least some of its human inhabitants actually live.

Or, you know, they're just guys wandering around the dungeon. It doesn't have to make sense. But you can do a lot of interesting dungeon design if you extrapolate.
Posted by Wayne R. at 10:14 AM