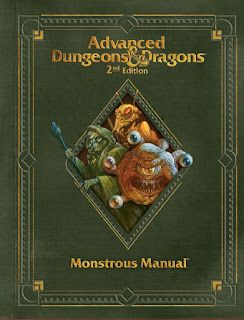 The second edition AD&D Monstrous Manual is now available as a PDF. This is part of the AD&D 2e books being made part of the D&amp:D Classics website. Unlike the PHB and DMG, the Monstrous Manual did not get hit with an ugly stick in the 1995 redesign, so it has exactly the same art and layout that it had originally featured two years earlier.

The original 2e books featured the Monstrous Compendium, with the idea being that the monster books should be loose-leaf sheets collected in an oversized binder, so new monsters could be added alphabetically instead of keeping them in a growing series of hardcovers. This failed for a simple reason: the monster entries didn't all take up a full page, front and back, meaning that one monster would be on the back of another. If it went from GA to GI, then where the heck do GE monsters fit? It also created a proliferation of loose-leaf monster sheets in boxed sets that would inevitably get lost in the shuffle. Happily, the Monstrous Manual and the Monstrous Compendium Appendix series pretty much fixed this, putting everything "core" into a big hardback and the "expansion" monsters into perfect-bound softbacks.

One of the things that you need to remember when looking back at TSR products is that they were laid out first and had content written to fit. This became extreme in the case of the Monstrous Compendium / Monstrous Manual series. Each monster had to take up at least a full page, whether it was needed or not. To facilitate this, sections on Combat, Habitat/Society and Ecology were added to pad out the entries. This is occasionally interesting but often reads like useless filler, which is a shame, as the format has a lot of potential that is occasionally reached. For instance, the Githyanki and Githzerai are extremely well-imagined and well-realized in this book, and the Tarrasque comes off well. But on the whole it doesn't stay at that level, and the format feels bloated.

A tremendous deal of the monsters in this book were illustrated by Tony DiTerlizzi. This was his first major work for TSR, and led directly to his doing all of the art for the Planescape line. For instance, DiTerlizzi's hobgoblin is a fully realized concept of a monster: 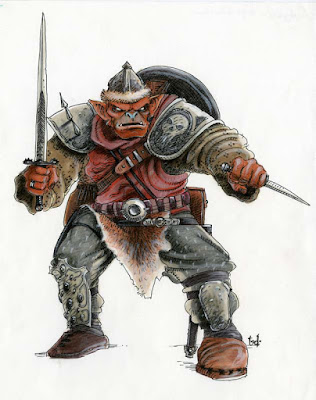 The art, despite happening against a plain white background, manages to evoke creatures that have come from a high-fantasy world with a lot of detail and a touch of whimsy. His new art book Realms is worth the price and shows a great array of his imagination, including sketches that didn't make it all the way to the MM. Shannon Appelcline (who writes the "product history" sections for these books) fails as a historian for managing to not even mention Tony's name when he describes a book that very directly feels Tony's stamp and was critical in starting his career as an RPG illustrator.

One game issue in this book that I see primarily as a negative: 2e experienced a lot of "dragon inflation." Dragons were bigger and more powerful in this edition than in previous ones. If you like that, that's cool, but I prefer dragons that fit in dungeons: relatively small, mostly threatening because of their breath weapons, and otherwise very realistic enemies starting at a fairly low level. D&D has trended away from this view, which paradoxically makes it so that you see fewer dragons in adventures outside of the really high levels.

If you want to read a monster book cover to cover, this isn't a bad choice. (The appendix books are a better choice, because the focus in the MM is primarily on "standard AD&D" monsters, while the other collections by definition are of new creatures.) The real issue with the book is that it feels like it was written by a committee. This intensive monster format could have been a great way to present a tightly integrated fantasy world, but instead it comes off piecemeal, really not even justifying all of these critters existing in the same universe. Due to the bloated stat entries, it's not very good for at-the-table use, and I switched to the 1e books while I was running a hybrid 1e/2e game in high school.

This was my first book of monsters, and I do think it's part of why I like monsters so much. As you've probably figured out, I credit Tony DiTerlizzi with a lot of that. If you've never read the book before, I'd definitely pick up the PDF and give it a whirl.
Posted by Wayne R. at 9:41 AM