Once More Unto that Vast Stony Hell 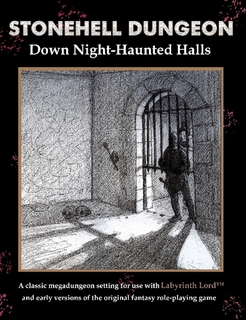 I ran Stonehell again last night. It went well: the PCs hired two clerics in the keep to investigate the Quiet Halls, and they actually turned the Bone Thing which had some of the best treasure thus far. They both failed to turn skeletons, who killed one of the clerics (he was laid to rest properly on one of the biers) and a crypt thing was fought off successfully, though it involved a burning door and some smoke inhalation.

After that, there was some adventurous touching of teleport glyphs, which led them ultimately to the third level and the obelisks that bring fresh air into the dungeon. They were close enough to get up to the stairs, which led (through two hobgoblins) to a part of level one they hadn't seen before. There was a fight with kobold slavers, which killed the other cleric but won the freedom of the slaves, two of whom became new henchmen-types.