Every Troll is a Horrible Snowflake 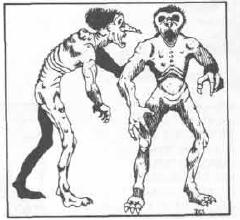 The D&D troll, like several other well known D&D elements (paladins, swanmays and the abilities of the dwarf character type) is ripped mainly from Poul Anderson's novel Three Hearts and Three Lions, about a character who finds himself a paladin in a world where the Matter of France is the world's history. The novel also created the basis for Law and Chaos as alignments, also used as part of Michael Moorcock's world, and ultimately in D&D.

Your prototypical D&D troll is an interesting monster in itself. Its regeneration makes it feared, and characters find ways to do acid and fire damage. It's a big horrible thing in itself, and fits as one particular embodiment of the troll. If I saw it underground I'd run. But it doesn't feel archetypal. A big part of that is Anderson's approach, which by and large D&D adopted - it's closer to fake science than the kind of "magical thinking" that I've been leaning towards. That's not to say I don't like a dose of science fantasy, but I like that for the incongruity. Magic should have its own rules.

The problem is, in fantasy, all trolls are different. The archetypal troll for some people is guarding a bridge; for others it turns to stone if exposed to sunlight. Trolls can be rubbery green things, grey cave things, and vary in the degree to which they are human-looking, although most of them tend to be humanoid. Likewise trolls can be larger or smaller than humans, but for the sake of making good D&D monsters I think larger is generally better. Smaller types are better off handled by various humanoids, like variations on the orc.

So as I see them, trolls should have two general classifications: regenerating trolls and trolls that turn to stone in sunlight. They can overlap in certain types of troll, but both types can exist independently. I think there should be some hostility between them, and in general the more horrid trolls should fall under the category of "regenerating" while the more human-like ones are vulnerable to sunlight.

Human-like trolls have a low level of civilization, based primarily on the troll family unit, that is a matriarchy; the troll mother stands at the head. These are the sort of trolls who are encountered in forests and when crossing bridges; they have a propensity to throw stones and threaten to eat humans, goats and the like. They think themselves to be very clever, but in reality they are not (in this sense they resemble another kind of troll). As such they will tend to try and bully characters before attacking, delighting in playing riddle games and seem smarter than humans. Appeals to greed and vanity are highly successful, and these trolls can be outsmarted by humans in ways that are at least as legendary as an epic fight. Of course, once they have succeeded in this, a character may only buy themselves enough time to run from the troll!

More inhuman trolls should take on various horrid aspects, of which the ugly D&D troll is just one common variant. I think the cave troll in The Lord of the Rings offers another good paradigm: an enemy with skin so thick it serves as heavy armor, beastly and lingering. Big huge brutes do not do well in the D&D combat system, and such trolls may be able to use their wide swings to attack multiple opponents per round. Moreover, regeneration makes such trolls harder to slay; each type should have its own vulnerability instead of copying the fire/acid combo particular to the D&D troll. 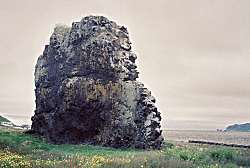 The final thing I want to explore is what impact a troll has once it turns to stone. Anderson rationalized this again - making the troll's stony body actually radioactive - which isn't the way I want to go but it does suggest that there should be some effect once the sun has turned the troll into stone. I think this is a good use for a variant such as startling statues, or wild magic, or a table of weird results if a character sleeps near the stone form of a troll. They can also function as weirdness magnets, drawing different esoteric and monstrous creatures, or even become a point of weird ancestor-worship for the remaining trolls. In any case, I don't think that something as cool as the stony remains of a magical creature should just be left alone.

Now that we've talked about trolls, the next post in the monster sequence will talk about gnolls (in logic-like fashion).
Posted by Wayne R. at 11:30 AM