Apologies for the lapse in updates, I've been working on some stuff for Dungeon Crawl and I've been busy both at work and at home. 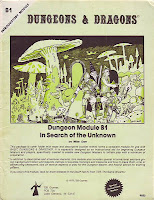 In the first issue of Dungeon Crawl, I used the "One Page Dungeon Template." I think it presented a pretty neat little dungeon level, but the format leaves me wanting in one respect: complexity. I tend to enjoy big dungeon maps, and I've actually worked out a level in the past on 17"x11" graph paper so it could be really sprawling. But I've been tinkering with another idea, and I've decided that I want to pursue a different approach for the next issue's main dungeon, and want to discuss it a bit here.

This thread on the OD&D forum about Geoffrey McKinney's Dungeon of the Unknown (for the recent LotFP kickstarter) got me thinking about a set of caverns I've been working on and hadn't really been satisfied with. The problem is, the dungeon was too static. I want it to be full of things that are already in motion, not waiting for PCs to come along and kill them (esp. because most of the encounters are intended to have options).

I agree with the theme of the blog post Geoffrey linked to in the OD&D forum thread - Why Word Walls Won't Work. The idea of workbook dungeons is appealing because it lets you vary things up; why does the giant weasel always have to be hanging out in its lair? And of course this has a very Holmesian imprimatur, since B1 In Search of the Unknown is the original workbook dungeon.

The format I've decided on is following B1 in a rough fashion. There are a few rooms where the encounters are programmed, because they are fixed; the statue and the altar (separate things) aren't moving around, they are placed there. The giant weasel lair, likewise, is a single place, and the giant bee hive, and the geological formations in the caves (and various growths) of course are built-in. But the rest of the content, both monsters and treasure, are going to be set aside in a separate table and potentially could be anywhere in the dungeon. 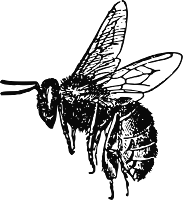 This allows for a "rival party," which is present in this dungeon in the form of a group of gnomes. It's my opinion that gnomes are an under-utilized element, and it adds a bit of time pressure since there's a limited amount of treasure and the gnomes are also looking for it. Also the gnomes are illusionists, which should have some interesting consequences.

From there, the key will also double as a wandering encounter list. Again I think this gives a real dynamism to a dungeon that is sometimes difficult to re-create. So there will be an absolute limit to the number of giant bees, and if you encounter all the bees from the key there won't be any more (except the ones permanently guarding the hive). Treasure won't move around, unless the gnomes manage to find it before the PCs can...

I'm hoping this kind of dungeon starts to catch on. It's something I'd find much more useful than the standard map-and-key format, which  I find often has trouble tying a dungeon together. I'm hoping, through the seemingly paradoxical method of taking all the moving parts out from the map keys and putting them into a table to make their interaction a much more fluid thing.

Anyone who wants to contribute to Dungeon Crawl should email me - wrossi81 at gmail.
Posted by Wayne R. at 9:37 AM