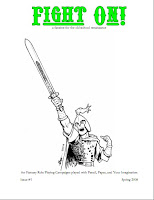 You've probably already read that Fight On! will be wrapping up with issue 14 or 15. It's disappointing because FO! was, to me, the best of the really community projects we had going in the OSR. The megadungeon designed by collaborative addition, the lists of spells and monsters that we'd throw stuff at, the always-excellent charts in the middle of the issue, it felt like something that truly belonged to the OSR as a whole.

Knockspell, which I suppose technically is still alive, has only released 6 issues since 2009; FO! released 13 from 2008-2011 and will wrap with either 1 or 2 in 2013. Loviatar went 14 issues and has finished its run. My own Dungeon Crawl zine only printed 1 issue, but that issue is free online. AFS is running and has gotten to #2. There's a DCC zine called Crawl which I haven't gotten, not being a follower of the DCC game.

I'd like to start exploring the concept of putting out an expanded Dungeon Crawl. After all, I have to put my trap charts somewhere, and FO! isn't going to be able to take it; at this point I want to do them all as one big article. With a baby and a game I'm starting (add Wayne Rossi on G+ if you want in) I don't have time for this to be anything more than a quarterly, and I'd want to do all fulfillment by Lulu (print and PDF). But I need content - I am not an artist and have no talent for it, and I don't write enough stuff to fill more than a few pages a month.

I do have some monsters ready and more concepts from my monster series here that I'll be expanding. I may also write up my lunar sandbox (hinted at here), but I'd need help with the map and the art. And of course the trap charts. I think expanded versions of the planar sketches I've been doing in general would be good article fodder.

My ideal follow-up to FO! would feature a mix of adventures, articles (instructional and expanding on game ideas), crunchy bits (classes, races, monsters, spells, magic items, random charts), comics/fiction, interviews and reviews. I think we'd need a good chunk of content to get this off the ground. I'm also considering whether the name should be different, since "Crawl" is getting out there as a zine.

So, the big question: who else is willing to be a part of this? Comment here or email me - wrossi81 at gmail.
Posted by Wayne R. at 9:23 AM