Planes as Planets: The Higher You Go, the Weirder it Gets 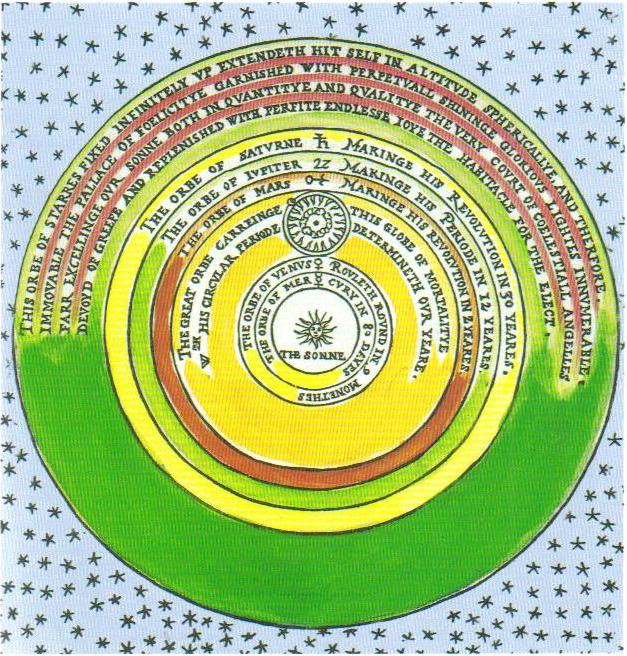 As the planets get further removed from earth, they are less and less familiar. The moon, Mars and Venus (which I've yet to detail) are wholly alien worlds but seem to run (more or less) according to rules we understand. The further planets are more inherently alien, possessed of greater magics and undreamed-of wonders. The science fantasy of the near planets instead goes into the extreme high fantasy of the far planets; after all, these are worlds full of beings that have great knowledge but are prone to drive you mad by contact.

Jupiter is a gas giant in our reality, and I think it works as an analogue in the farthest planes. The Titans of Jupiter are massive beings relative to humans, and have advanced magic to the point where they live in floating cities among the clouds. Their faces are long, with perfectly oval eyes without pupils, and they have only slight noses; their preferred garments look superficially like robes but contain intricate patterns that go down to the very fabrics that they are made of. Despite the fact that this planet's shifting winds would seem to be a manifestation of Chaos, it is actually the opposite; the super-storms have settled into a single massive system of hierarchical bands, with the Great Red Spot as the ultimate ordered storm, effectively permanent. The floating cities are massive and permanent, and run in fixed schedules that interact with the bands of storm that they are fixed above. The Titans travel to and fro on sky-ships using massive, six-winged creatures that are to dragons as the Titans themselves are to humans.

By the time we reach the Titans, human alignment - good and evil - has been transcended. The inhabitants are not yet gods, but relative to humans in terms of power they are very nearly demigods. Scant few human affairs are important on the massive cosmic scale of the Titans, yet their intricate plans occasionally cross the earthly planet. When they do, it is often in unusual ways, through powerful artifacts or uncanny magic - the kind of things where the meaning is in long and arcane plots that the human mind can't even fathom. The Titans, like God-Emperor Leto II in Dune, think in the truly long-term, the infinite, and as such their perspective and goals are often subtle in ways that we can't really fathom.

Even beyond Jupiter, there is Yuggoth. The Mi-Go are the planet's most infamous denizens, but they are not meant to be its first. As such, it seems to me that the things found on Yuggoth in a medieval fantasy world might be the ones alluded to here:

Yuggoth... is a strange dark orb at the very rim of our solar system... There are mighty cities on Yuggoth—great tiers of terraced towers built of black stone... The sun shines there no brighter than a star, but the beings need no light. They have other subtler senses, and put no windows in their great houses and temples... The black rivers of pitch that flow under those mysterious cyclopean bridges—things built by some elder race extinct and forgotten before the beings came to Yuggoth from the ultimate voids—ought to be enough to make any man a Dante or Poe if he can keep sane long enough to tell what he has seen... - "The Whisperer in Darkness" by H.P. Lovecraft

The "elder race" is, perhaps, the one that in our time period for D&D was inhabiting the distant planet, before the later arrival of the better known fungi. It seems odd, after all, to assume that the Cthulhu Mythos are trapped in time forever as they were in the stories of the 1920s and 30s. As excellent as Realms of Crawling Chaos is, I think we need to be able to imagine some new Cthulhuoid entities that control the world.

What I'm thinking in this all-but-lightless world is of two main species. One is an entirely immobile but highly intelligent and powerful psionic crystalline entities, which enslaved a species of 2-story tall cyclopean beings with 6 tentacular arms, each ending in razor-sharp hooks or pincers of various types that are meant to be utilitarian in their construction works. There are also centipedal worker drones that haul massive blocks and dig the tunnels under the planet's surface. These are accompanied by various lesser-known members of the Great Old Ones, again not quite deities but nearly equivalent for human purposes.

Obviously, Yuggoth is a Chaotic planet - it is so far beyond human morality that our plans are irrelevant, but the ends of the Mythos deities are to reduce the universe to its ultimate chaotic state. The crystalline entities know that their slaves will eventually revolt and shatter them, and then their consciousnesses will lie dormant in thousands of pieces for millennia until the stars are right and they are re-formed to complete the rituals that they have been laying the ground for.

This is my vision for Law and Chaos; it is the truly LONG game, and the higher planets are fully engaged in that fight. They are not yet the god-realms, nor their opposite; we will be getting there next. When we go to Hell.

(As an aside, if anyone wants to draw a picture of 6-winged dragons or floating cities above the clouds of Jupiter, or of crystalline monoliths and 8-limbed servitors in Yuggoth, this entry certainly could use the artwork.)
Posted by Wayne R. at 8:49 PM