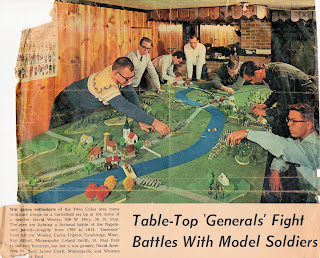 I wrote a post back in 2010 called Defining D&D - The Hidden Map Game that expressed the way I understand the dungeon portion of the game. I purposefully wrote that entry up as a part 1 of 2, but life got in the way of actually finishing part 2, and I got permanently derailed because I didn't feel the historical research  on the second part was up to the level I wanted it at. Fortunately, Playing at the World collects an absolutely tremendous amount of the game's history and evolution from wargames to RPGs.

Before I begin, I want to recommend the recent Grognard Games interview with Rob Kuntz. It touches on a lot of the points I'm going to be talking about and Kuntz is really quite insightful about the game. His play and approach are also helpfully different from those of Mike Mornard, who's been a very good evangelist for Gygax-style D&D in the last few years.

The hidden map game alone is not what makes D&D an RPG. You could very easily have a game with a hidden map exploration that doesn't take on actual RPG tendencies, like Dungeon! or HeroQuest. It requires something extra, that creates the game as a wide-open imaginative exercise. This was present at the very start, and I think in a very real way explains the staying power of D&D as a game.

Dave Arneson had participated in David Wesely's Braunstein games, and indeed was an audacious participant. The original Blackmoor was a fantasy Braunstein, and there is an obvious connection even in the games' names. But what was the black magic that Arneson had hit upon?

Braunstein brought to the wargame the idea that, given certain victory conditions and the scenario's parameters, anything was possible. It was a blank canvas that the players took to with gusto, using all their cunning to find ways to achieve their given goals by thinking outside the standard set of options available in a wargame. It was a success, but it wasn't a given that it would propagate into something further, because after all the wargames were one-off affairs.

It was Blackmoor, the fantasy Braunstein, that took this a radical step forward by adding in the campaign to the mix. This created something wholly new, although not entirely instantly. The earliest games were adversarial, giving rise to such characters as the vampire Sir Fang (who was countered by the addition of the priest, later renamed the cleric). Over time the focus shifted to the dungeon, where the fantasy Braunstein campaign intersected with the hidden-map game.

The exploratory game was completed by Gygax, who added on the brilliant idea of giving experience for gold pieces earned. This fits in with the Braunstein concept of creating a game that is open within certain victory conditions - and in Greyhawk the players responded well. This goal was overridden by later editions, which changed it from an exploration game to a monster-slaying game, and further mutated with later editions when combat "moves" were tightly pre-defined and the game became fully "closed" in Rob Kuntz's terminology.

As players got tired of the dungeon, a wilderness game was also added, which continued the exploratory theme, and climaxed in the endgame when the player characters became lords of their own domains and attracted followers, had incomes and so on. This continued the fantasy Braunstein out of the confines of the dungeon into a wider world. For me, this is the essence of Dungeons & Dragons: a fantasy Braunstein that is played through a hidden-map game in the dungeon and a hex-exploration game in the wilderness, where advancement is driven through the acquisition of treasure, with the end goal of becoming Lord of your own cleared domain area. Getting back to that is a major step in the right direction, and it's one that the old school has slowly but surely been making.
Posted by Wayne R. at 9:05 AM