OD&D, soon to be back in print 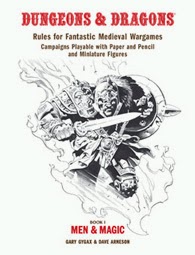 You may already have heard that Original Dungeons & Dragons is being reprinted.

At $150 it's a bit high priced for a hobby purchase, and the cover art looks like Wizards of the Coast figured out how to make the OD&D booklets look worse than they originally did. Of course, the $10 original set would be $45.92 in today's dollars and you'd have a bit of trouble getting late printings of the original boxed set, much less the supplements, for $150. But it's still not going to make OD&D exactly a mainstream game, which is what a lot of people want.

I'm holding out hope for a hardcover under $75 that would collect all the books in a solid, game-worthy volume. The problem isn't that the edition is so expensive but that it's exclusively a collector's edition and not something for everyday play. I have a pristine set of OD&D books in a slightly worse for wear box that sits on my shelf, and a rougher set of books that I use for reference (two copies each of volumes 1 and 2, and a single extra copy of 3). The problem is getting the books into formats where I can hand them to players and not have to ask for a deposit on my collectible. Not to mention, being able to play on G+ without requiring everyone to use their own collectibles.

I may get it for the sheer reason that I want more like it and it's best to vote with your dollars, although it hurts a bit with a hundred and fifty of them at once. I didn't need the AD&D hardbacks but I bought them because I wanted more like them, and enough other people did the same that WotC is listening.

For me, the real idea mine of the old school renaissance was not sparked by the retroclones but by the rediscovery of OD&D in the PDFs that were briefly legally available. Finding the original three books and the freedom they offer - a very real sense of playing without a net and without the rather byzantine rules of AD&D - enabled people to rediscover the megadungeon, the hex crawl and the spirit of pre-1979 D&D. I'm still holding out hope that this will be available to large numbers of gamers once again.
Posted by Wayne R. at 4:49 PM