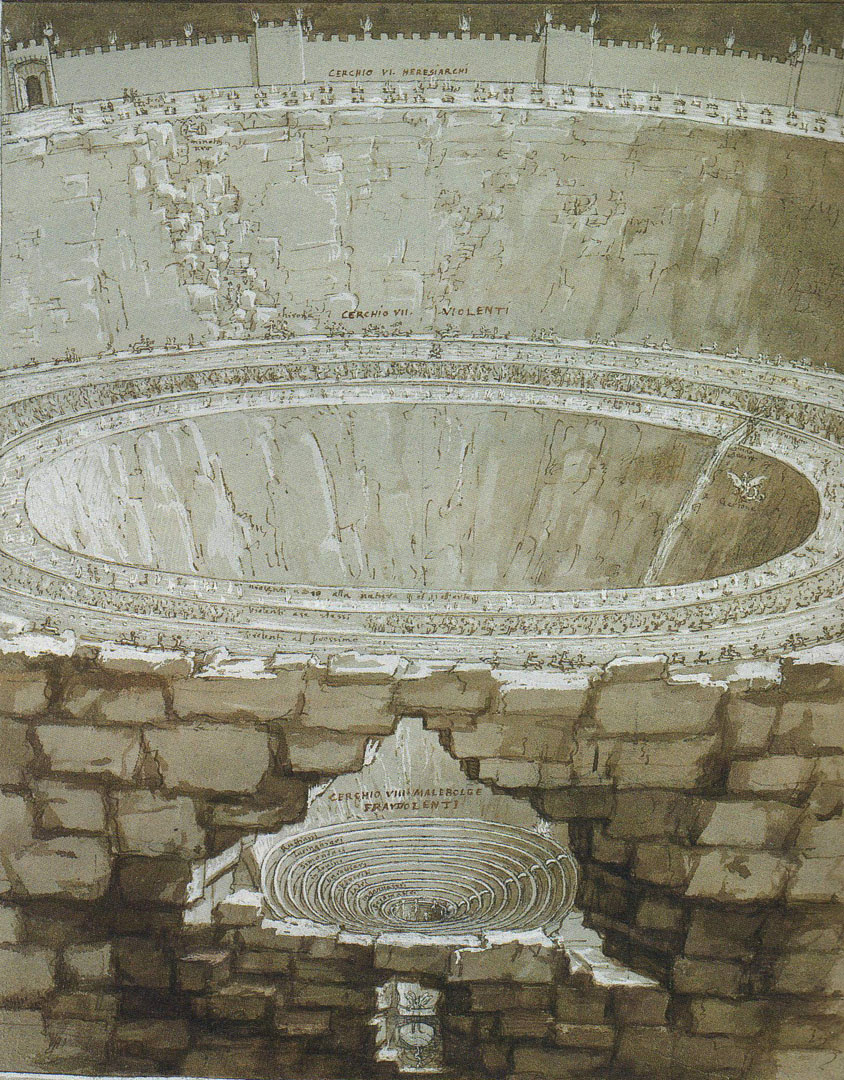 I realize I've hinted for a while at a post about Hell and I apologize for not having it up sooner, but life has gotten in the way as it so oft does; I needed the creative juice to be going into my game for last Friday and not the Hell post, so that took priority. On the plus side, it's time now, so here goes.

The grand works of western literature tell us relatively little about heaven, a prosaic realm filled with fluffy white clouds and angels with harps and beasts with six wings and eyes front and back ... Okay, the biblical heaven's a bit more interesting than the stereotypical presentation gives it. But it is fairly one-note since the weird beasts are constantly singing the Sanctus. Forever. But it's not heaven that gets the love, even in Chick tracts it's the opposite that really stokes the imagination.

My look so far has been at the higher planes – the ones above the earth – and reinterpreting them as planets. One of the critical mis-steps in the transition from OD&D to AD&D was the loss of the very concept that there were higher planes, and by consequence also lower ones. The Nine Hells in AD&D are just one of the set of planes on the Great Wheel, hardly fitting of one of literature's greatest underworlds. Going along with this, AD&D in its reliance on the nine-point alignment system created a division between demons and devils, and even tried to turn an etymological difference into a separate category of daemons. Since this entire series of posts has been centered on a total rejection of AD&D cosmology, it is only fitting that I remove this delineation as well.

So what do we know about Hell in OD&D? When it was first published, the Balrog was just a big monster in the first book of Lord of the Rings. It wasn't until 1977 and The Silmarillion that the actual description of Balrogs as corrupted Maiar (god-like angelic beings) in the service of the fallen Vala, Morgoth, was published. Eldritch Wizardry preceded it with turning the Balrog into the Balor, an "upgraded" version that was accompanied by five other "types" of demon. These later turned into the demons of the 666-layer Abyss. We also know that a character who lost his body while in astral form would be sent gibbering down into the lowest Hell. And that's about it. 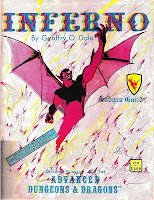 The most popular version of Hell is obviously the first portion of La Commedia Divina by Dante Alighieri, "l'Inferno" (the Italian word for Hell). This has been adapted for AD&D not once but multiple times – once by Judges Guild, written by Geoffrey O. Dale, and the other time in Dragon Magazine, in a series of articles written by Ed Greenwood that became the basis for the AD&D Nine Hells, working within Gygax's strict cosmology and replicated in Manual of the Planes and Planescape, using the bowdlerized name "Baator" in the latter. The problem with Dante is that he was more concerned with the sinners and their eternal fate, a concept that is sidestepped in D&D when characters are not generally in an either/or situation between Heaven and Hell. It's a rather crap deal for the evil, whereas the good are just given a pass into a better realm. Where's the fun in that? 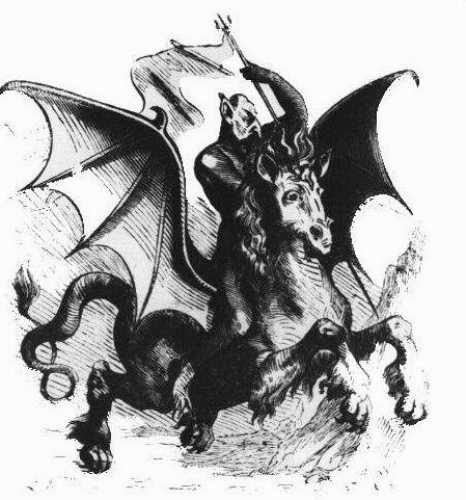 Dante's "Inferno" is much more about sinners and sin than about demons. And for our purposes (this series is still an attempt to come up with new and interesting monsters) that's not quite as much fun. Sin monsters are an interesting subcategory but that really only gets you seven good ideas, and ones that have probably been trod before. What I find much more interesting are the 72 demons of the Ars Goetia in the Lesser Key of Solomon, a classical work of demonology. Simply reading the list of demon lords and their "legions of demons" and their special abilities makes it seem less like a Wikipedia page and more like a list out of a supplement somewhere between an RPG and a wargame.

The goetic demons are interesting because they do not only slay; they command legions of demons which are presumably creatures somewhat Balrog-ish in mein. But they also are very seductive, having the ability to bestow specific boons. Returning to our concept from Contact Higher Plane, the demons of the Ars Goetia are often able to answer questions accurately. They also don't take quite the kind of elaborately grotesque forms that have proliferated in fantasy, some weird mix of Giger and Lovecraft that has come to dominate the scene as far as evil goes. To me, the more subtle seduction is a far more refined form of evil - "wrong" but more in a way that makes you feel wrong deep down inside.

For lower demons, one of the more promising is the list of demons described by Alphonse de Spina: Fates, Poltergeists or Goblins, Incubi and Succubi, Marching Hordes, Familiars, Nightmares, Demons formed from Human Semen, Disguised Demons, Demons who Assail the Saintly, and Demons who Instigate Witchcraft. The "marching hordes" are obvious candidates for a whole hierarchy of demonic enemies, while Succubi, Nightmares and Familiars are fairly well covered. Demons from human semen are cambions, who've been treated numerous times in D&D. The most intriguing to me is the goblin or poltergeist; after all, have not perhaps millions of goblins been sword fodder in D&D over the years with little to show for it? A demonic connection rather than the typical humanoid hierarchy would be one angle to change up the stock enemy; instead of just some smelly critters, they are weird semi-demonic things. And poltergeists in a dungeon are just too much fun to pass up; the mere potential for mischief is so great.

For now, that's Hell. The next monster post will be on Monsters of Myth.
Posted by Wayne R. at 4:29 PM