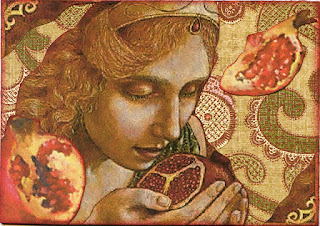 This is the start of a new series inspired by the discussion several years ago by Philotomy on the Dungeon as a Mythic Underworld. To boot, I am going to be talking about ... the underworld in mythology, and its implication on Dungeons & Dragons and similar games where characters go underground to seek treasure. One convention: in these posts I'm going to use the Greek names for deities, even when the Roman names are better known.

In the short version: Persephone was a goddess of nature and flowering plants. She was abducted by Hades, god of the underworld, who burst forth from a rift in the earth. Her mother, Demeter, eventually convinced Zeus to send Hermes to retrieve her. However, she had eaten either four or six pomegranate seeds from a fruit offered to her by Hades, and the lord of the dead was able to claim that each year, she must spend an equal number of months as his queen in the underworld.

This was a transparent explanation for plant growth in winter, which is alternately described as either Demeter's sorrow for her daughter in the lost months, or the effect of Persephone's simple absence. But that's not really what I think is interesting in this myth. Rather it's the idea that things in the underworld can permanently change a visitor.

A literal interpretation of the Persephone myth takes us to an interesting sort of "special" in a dungeon chamber. A table is laid with exquisite food and drink, but drinking it places the characters under an enchantment specific to the underworld. For instance, they might fall under a powerful wizard's Geas, or any command or curse type of effect, and optionally the amount of food eaten might be proportional to the price taken. This is suitable for any food coming from the dungeon, or perhaps any kind of "garden" sub-area, et cetera.

Hewing still closer to the Persephone myth, one possible consequence is an impressment into service within the dungeon. A character might not be the "queen" of the underworld – Persephone was a goddess, after all – but they might have to help build out a new sublevel, or maintain and clean traps, or guard against intrusions by other parties, et cetera. Of course this has the potential to thoroughly hijack a campaign.

Moving further afield, there is a general idea that things of the underworld are not wholesome and safe, quite possibly in a sense that implies moral corruption or chaos. If you like, corruption based on, say, a powerful magical treasure bound to the underworld can follow a path similar to the physical corruption of wizards in Dungeon Crawl Classics, or it can stay closer to home with the kind of mental drawbacks that we usually find with artifacts. It's interesting to make the PCs also slowly become creatures of the dungeon, in the sense of Nietzsche:

He who fights with monsters might take care lest he thereby become a monster. And when you gaze long into an abyss the abyss also gazes into you. – Friedrich Nietzsche, Beyond Good and Evil

This sense of corruption can be signaled in a lot of different ways. Perhaps the coins, instead of showing good and wise kings, are transfigured into the faces of wicked tyrants; instead of portraying the lawful and virtuous gods they now portray leering demons. Metal implements such as iron spikes left too long in the dungeon might take on a sinister patina, or wooden ones growing dark and twisted where once it was straight and true.

As the PCs delve deeper, the dungeon can subtly make them its own. When they leave, perhaps, or if they are foolish enough to overnight underground, they can have vivid dreams of the underworld passages, ending just before their bloody death. A low Constitution PC might pick up a lingering cough or chill that marks them, or the PCs' faces might take on the cast of the dungeon's unhallowed darkness.

Of course, the end stage of this is the Innsmouth effect - where the PCs become fully monstrous. This should be preceded by both PC choices, and some kind of warning effects. Perhaps drinking from mysterious pools and fountains has a temporary helpful effect but slowly changes the characters; they might get infravision, or the ability to open stuck doors, without the normal hassles assumed by the D&D rules. But there needs to be a way to reverse or turn back from this course. It's worth thinking about having the PC "go monstrous" at certain intervals, like in lycanthropy, so they don't experience it all at once.

The story of Persephone was a myth that deeply affected me when I read it as a kid. I've always felt that the idea that you make one mistake and now belong to the underworld is one of the more chilling ideas in mythology. So naturally I see it as a key building block if you want to make your dungeons mythic.
Posted by Wayne R. at 8:26 AM